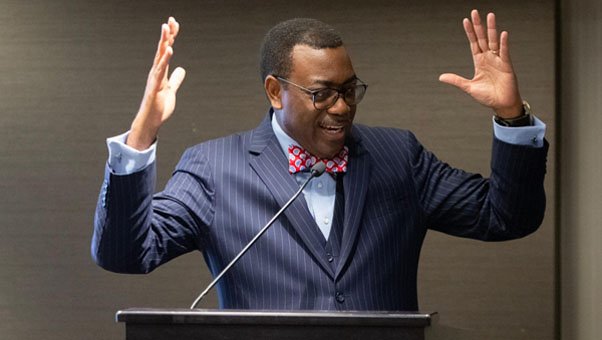 Investments To Cushion African Countries Against Climate Shocks Not Enough

At a gathering of world leaders in New York, Adesina disclosed commitments on tackling global warming — a massive solar energy project in the Sahel — and an insurance scheme that poor countries can access, when the next cyclone strikes.

The AfDB would double its climate financing to emerging economies to 25 billion dollars, from 2020 to 2025, half of which would help governments adapt to droughts, rising tides and other impacts of climate change, said Adesina.

The bank would also help raise 250 million dollars to fund co-payments for insurance premiums, so that disaster-prone countries get cash back when extreme weather events wreak chaos on their economies, noted Adesina.

“Poor countries didn’t cause climate change, they shouldn’t be holding the short end of the stick,” added Adesina.

Another 20 million dollars would fund the Sahel’s new ‘Desert to Power’ solar scheme, for generating 10,000 MW of clean electricity for some 250 million people, including 90 million rural folks, who live far from a power grid, affirmed Adesina.

“This will make the Sahel, the Baobab of energy,” said Adesina, referencing the hardy African tree.

Such funding is welcome, but may not be enough. Africa needs between 7 to 15 billion dollars every year to adapt to the impacts of climate change, revealed Adesina. 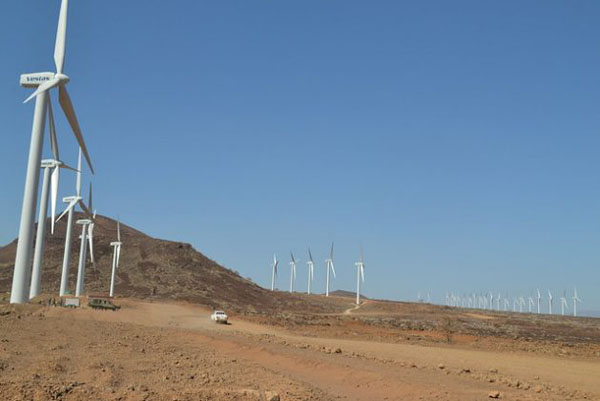 The African Development Bank (AfDB) has been investing in projects to assist African countries adapt to climate change. Seven out of the 10 most vulnerable countries to climate change are located on the continent even though Africa contributes less than 4 percent of world greenhouse gas emissions (GHG). However, Africa needs between 7-15 billion dollars every year to adapt to the impacts of climate change, according to the AfDB. Pictured here is a wind energy generation plant located in Loiyangalani in northwestern Kenya. The plant is set to be the biggest in Africa, generating 300 MW. Photo credit: Isaiah Esipisu/IPS.

More broadly, the continent needs between 130 and 170 billion dollars of investment in power plants, internet cables and other infrastructure each year, leaving a funding gap of some 68 to 108 billion dollars, according to AfDB data.

Benedict Okey Oramah, President of Afreximbank, a trade finance body, said African economies had to work harder to train workers and expand their markets to lure investors to the continent.

“Countries which are fragmented are small markets, they cannot be of interest to people who want to put money to grow in a massive way,” Oramah told a meeting of African leaders at the UN, last Wednesday.

“We have to build, again, the technical schools that we used to have; we have to build universities of science and technology so that we can have the right skills to take up the kinds of jobs that are beginning to emerge,” he advised.

Talks came amid concerns from teen Swedish activist, Greta Thunberg; U.N. Secretary General, Antonio Guterres; and many others that the world was not on track for slashing emissions of heat-trapping gases.

Guterres warned that while countries were making progress towards the UN’s so-called Sustainable Development Goals (SDGs), more efforts were needed.

“Let us be clear, we are far from where we need to be. We are off track,” said Guterres. “Deadly conflicts, the climate crisis, gender-based violence, and persistent inequalities are undermining efforts to achieve the goals.”

The 17 SDGs were agreed by the U.N.’s 193 member states in 2015, in an effort to curb war, climate change, famine, land degradation, gender-based inequality, and other global ills by 2030.

Progress is being made in access to energy, to decent work, and in battling poverty and child mortality, but youth unemployment has plateaued and global hunger and gender inequality continue to rise, the U.N. says.

In an impassioned address to a U.N. climate summit, last Monday, youth activist Thunberg raged at world leaders in a crowd that briefly included United States President, Donald Trump, and his entourage.

“You have stolen my dreams, my childhood, with your empty words,” said 16-year-old Thunberg. “We are in the beginning of a mass extinction, and all you can talk about are your fairy tales of money and eternal economic growth.”