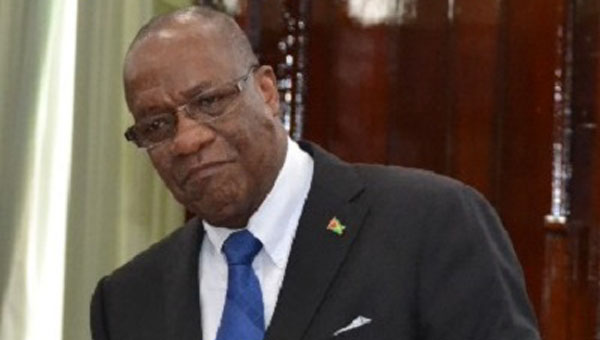 The National COVID-19 Task Force (NCTF), headed by Joseph Harmon (in photo), its Chief Executive Officer (CEO), cautioned Guyanese to comply with the curfew and emergency measures that were implemented to prevent the spread of COVID-19.

Former Guyana Minister Of State, Joseph Harmon, Relinquishes US Citizenship Ahead Of 2020 Election

GEORGETOWN, Guyana, November 15, 2019 (CMC) – The Director-General in the Ministry of the Presidency, Joe Harmon, announced, yesterday, that he is no longer the holder of U.S. citizenship .

Harmon was among four government Ministers, who were forced to resign from Parliament and their Ministerial portfolio, after the Court reaffirmed that it is illegal for the holder of dual citizenship to serve in the Guyana Parliament.

The Constitution has always been clear on the issue, but it was one that was ignored by all of the political parties in parliament, as both sides had dual citizens serving as Members of the House.

Last Friday, during a press conference, Harmon disclosed that he applied to relinquish his US citizenship and was informed, in early October, that the application had been approved.

With Harmon relinquishing his U.S citizenship, the way is now cleared for him to be a candidate on the coalition’s list for the March 2020 elections.

He served as Minister of State before he was forced to resign from the position after the Court’s ruling.

Harmon is the second former Minister of government to relinquish foreign citizenship.

A few months ago, former Foreign Affairs Minister, Carl Greenidge, formally renounced his British citizenship. He has also indicated his readiness to serve as a candidate for the coalition at the upcoming elections.