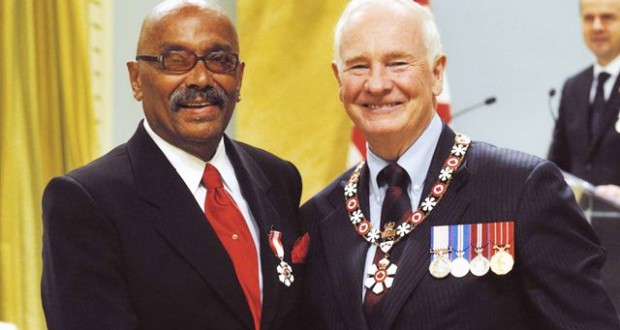 The above photo shows Archie Alleyne receiving his Member of the Order of Canada honour from Governor General David Johnston.

TORONTO, Ontario – Canadian jazz pioneer, Archie Alleyne, who was the recipient of a Lifetime Achievement Award from the African Canadian Achievement Awards (ACAA), died, on Monday at 7:53AM, after a battle with prostate cancer.

The legendary self-taught drummer, who broke colour barriers in Toronto clubs in the 1940s, was 82.

During his 60-plus-year music career, he became the “drummer-of-choice” for visiting jazz stars, including Billie Holiday, Ben Webster, Lester Young and literally hundreds of Canadian jazz players and singers.

Born Archibald Alexander Alleyne on January 7, 1933 in Toronto, Ontario, Alleyne gained critical attention as the resident drummer at the famous Town Tavern for more than a decade, from 1955 to 1966.

He also traveled all over the world with various artists, appearing in Birdland, New York, The Blue Note in Chicago, Baker’s Keyboard Lounge in Detroit, festivals in Europe, and tours in Egypt, Nigeria, Scotland, Ireland, Spain, Italy and Brazil.

After an automobile accident in 1967, Alleyne put his music career on hold and ventured into the world of business. He partnered with entrepreneur Howard Matthews, and former Toronto Argonauts stars, Dave Mann and John Henry Jackson, to establish the popular Underground Railroad Soul Food Restaurant in Toronto.

Throughout the mid-1980s he became an outspoken activist who vehemently protested the Canada Council exclusion of jazz artists from funding, and successfully led a high profile lobby to ensure Black musicians were represented in the Toronto Jazz Festival.

In addition to his immense contributions, Alleyne co-founded Kollage, the contemporary hard bop sextet with the late Doug Richardson in 1999. In 2001, he created the Evolution of Jazz Ensemble (EOJ) to provide mentorship and performance opportunities for young, primarily African-Canadian students graduating from post-secondary music programs.

By 2003, he established the Archie Alleyne Scholarship Fund (AASF) a not-for-profit organization to recognize and encourage academic excellence in jazz studies. At the end of 2011, he received the highest civilian recognition in the country, as a Member of the Order of Canada. He was also awarded the 2015 Harry Jerome Lifetime Achievement Award.

The launch of his memoir Colour Me Jazz, which was to be held on June 14 at the Paintbox Bistro, has been postponed until further notice. A celebration of his life will be scheduled later this month, details of which will be announced on the website and Facebook pages of the Archie Alleyne Scholarship Fund.

In lieu of flowers, the Alleyne family has requested that donations be made to the Archie Alleyne Scholarship Fund. The family would also like to acknowledge Archie’s son-in-law, Bruce Wilson, who died earlier this year, and the following families: The Downes, The Jones, The Jacksons and The Matthews.

There is also a social media campaign to commemorate Archie’s memory, with the official hashtag tribute #withoutthepastthereisnofuture.