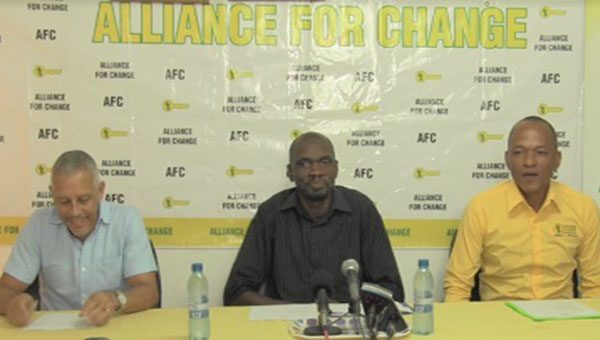 GEORGETOWN, Guyana, November 15, 2019 (CMC) – The Alliance For Change (AFC), the minority partner in the coalition A Partnership for National Unity (APNU) government, said, today, it remains optimistic that talks on a successful renegotiation of the Cummingsburg Accord will be achieved, before Monday next week.

The Cummingsburg Accord is the agreement that brought together the AFC and the then-main opposition, APNU, ahead of the 2015 general elections.

The parties are now holding talks as they prepare for the March 2020 regional and general elections, after Opposition Leader, Bharrat Jagdeo, was successful in moving a motion of no confidence against the coalition and eliminating its one-seat majority in the 65-member National Assembly.

AFC treasurer, Dominic Gaskin, told a news conference that while one deadline had already been missed, the AFC is working to have the discussions completed by Monday.

Gaskin told reporters, one item is holding up the successful conclusion of the discussions dealing with the formula for the allocation of seats in the Parliament and on the Regional Councils, as well as Ministerial portfolios.

“The AFC has agreed to a final meeting with APNU, on Monday 18th November 2019, at which a single outstanding matter is to be resolved. All other terms of the Accord have been provisionally agreed,” Gaskin said, without elaborating.

Media reports, here, said that the APNU is pushing for a 70-30 formula in seats allocation, while the AFC, which initially wanted the original 60-40 formula to remain, is now pushing for a 63-37 formula.

Gaskin said the negotiation will continue, on Monday, and he is confident that an agreement will be reached to move the partnership forward.

AFC Deputy General Secretary, Lennox Craig, said the party is preparing to launch its campaign for the upcoming elections, and was confident that an agreement would be reached on Monday, as the party prefers heading to the polls as a united front.

“AFC is battle-ready and we desire a partnership with the APNU. It is the preferred way to go in these elections. And we are battle-ready and with or without our partner, we are ready to go”, Craig said, noting the AFC has already completed a manifesto and will be opening new offices for the elections across the country.

Earlier this week, President, David Granger, who heads the APNU, said he would be the one to choose a Prime Ministerial candidate, ahead of next year’s polls, despite the AFC insisting that it should make the choice.

Granger said, last Wednesday, that when the time is right, he will select a nominee that will align with what is best for the people of Guyana in the March 2, 2020 regional and general elections.

The APNU has been in discussion with the AFC on the selection, with the latter pointing to the Cummingsburg Accord, under which the APNU nominates the Presidential candidate and the AFC, the Prime Ministerial candidate.

“I am a prudent and wise leader, and I will make the choice which, I believe, will deliver the best results for the people of Guyana. My objectives and that of the six parties in the coalition would be to ensure that Guyana gets the best, and we’re working on that,” Granger said.

Granger’s current prime minister is Moses Nagamootoo, but the AFC is said to be pushing for its leader and Public Security Minister, Khemraj Ramjattan, to replace him.