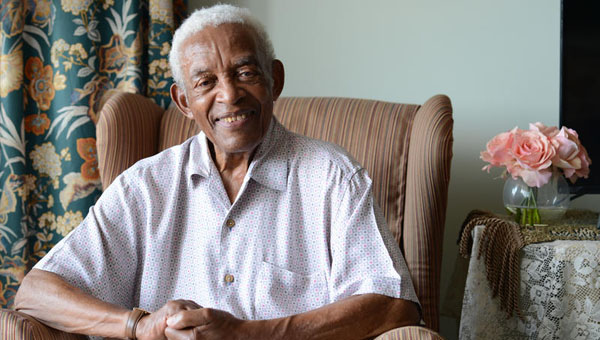 Irving Burgie at his home in Queens, New York in 2017. Burgie, who wrote the lyrics to the traditional Jamaican song "Day-O" died last Friday at the age of 95.

US Composer Of Day-O, Jamaica Farewell And Barbados’ National Anthem Dies At 95

BRIDGETOWN, Barbados, December 4, 2019 (CMC) – US composer, Irving Burgie — who helped popularise Caribbean music with songs such as Day-O, Island in the Sun, Jamaica Farewell and Mary’s Boy Child — is dead.

Born on July 28, 1924, the well-known composer, whose songs sold more than 100 million records worldwide, died last Friday, as a result of complications from heart failure.

Sometimes known professionally as Lord Burgess, he was an American musician and songwriter, and was regarded as one of the greatest composers of Caribbean music.

Burgie, 95 — who was born in Brooklyn, New York, to a mother from Barbados and a father from Virginia — also composed the national anthem of Barbados, “In Plenty and In Time of Need”, which was adopted in 1966 at the time of the island’s independence.

However, he was best known for helping singer, Harry Belafonte, bring calypso music to the mainstream with Day-O.

Burgie went on to write eight of the 11 songs on Harry Belafonte’s 1956 album, Calypso, which was the first album in the US to sell more than a million copies.

During his career, he also worked with many artists, including Jimmy Buffett, Chuck Berry and Sam Cooke.

Burgie set up his own publishing company, and by the late 1950s was able to live comfortably off the royalties he received. In 1960, he funded a magazine, The Urbanite, in Harlem, and helped finance civil rights activists.

He also wrote the music and lyrics for the 1963 off-Broadway musical, Ballad for Bimshire, and co-wrote the book, with Loften Mitchell. The show opened at the Mayfair Theater on October 15 and ran for 74 performances.