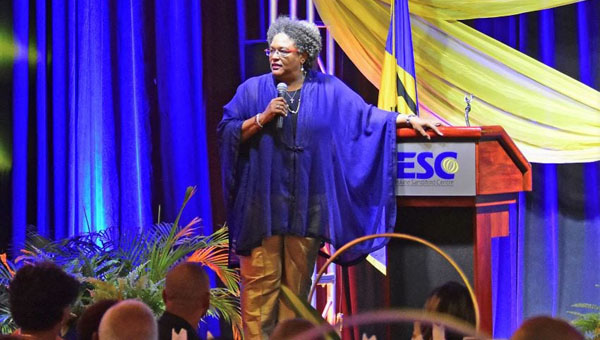 Barbados PM Warns Of Attempts To Divide The Caribbean

BRIDGETOWN, Barbados, January 20, 2020 (CMC) – Barbados Prime Minister, Mia Mottley, has warned of the attempt to divide the 15-memberCaribbean Community (CARICOM) grouping, as some regional leaders get ready to meet with the United States Secretary of State, Michael Pompeo, tomorrow.

Addressing a gala to celebrate the centenary of the birth of the late Barbados Prime Minister, National Hero and regional integrationist, Errol W. Barrow, last Saturday night, Prime Minister Mottley said that she is conscious that in the next week, questions will be asked as to whether the Barbados Foreign Minister “happened to be missing in a meeting in Kingston in Jamaica that will take place on Tuesday”.

“We don’t look to pick fights. I don’t look to pick fights, but I am conscious that if this country does not stand for something, then it will fall for anything. As Chairman of CARICOM, it is impossible for me to agree that my Foreign Minister should attend a meeting with anyone, to which members of CARICOM are not invited. If some are invited and not all, then it is an attempt to divide this region,” Mottley told the ceremony.

“We welcome the visit of Secretary Pompeo as a demonstration of the commitment of the United States of America to, once more, strengthen its engagement with Jamaica and the wider Caribbean. We truly look forward to this opportunity to engage and reinforce our longstanding ties,” Johnson Smith added.

Pompeo will hold talks with Jamaica’s Prime Minister, Andrew Holness, and senior members of his Cabinet, on the second day of the visit, and is expected to give a policy speech on the Caribbean region’s critical importance to the United States, and the country’s renewed commitment to closer ties, based on shared values, interests and economic prosperity, the Ministry of Foreign Affairs and Foreign Trade said.

Both the Jamaica Gleaner and the Observer newspapers, quoting sources, said that Pompeo is also due to meet with several Caribbean leaders.

But a CARICOM source told the Caribbean Media Corporation (CMC) that the regional grouping had not been formally invited to participate in the discussions, during Pompeo’s visit.

However, last year, Prime Minister Holness, was among four Caribbean leaders – including St. Lucia, the Bahamas and Haiti – who flew to Miami to meet with US President, Donald Trump, where they discussed the ongoing political situation in Venezuela, where Washington is seeking to remove President, Nicolas Maduro, in favour of Opposition Leader, Juan Guaido.

CARICOM leaders, at their last summit in St. Lucia last July, reiterated their position of non-interference and non-intervention in the internal affairs of Venezuela.

Mottley told the gala that she was conscious that when Errol Barrow stood and remarked that “we shall be friends of all and satellites of none”, little did he know that that statement would be embraced by every single prime minister of Barbados that succeeded him.

“It is as valid today, perhaps even more so, than it was at the time of its initial delivery. And I say so, conscious that principles only mean something when it is inconvenient to stand by them.

“Conscious that this region must always check itself to ensure that we not become the pawns of others, the satellites of others, but that we keep ever-most and uppermost in our minds, what we must do for our people, without simply becoming pawns on a chessboard for others to be able to benefit from,” she added.

She said “Barbados first, as expressed by both former Prime Ministers, Grantley Adams and Errol Barrow, has come to mean, for us, that Barbados must stand for something.

Similarly, the understanding that we shall not loiter on colonial premises or loiter on any premises, where we are not wanted, continues to be as relevant today as it was then.”

She told the audience that the expression delivered to the then-President of the United States of America, “who offered to pay our dues to join the Organization of American States, when Mr. Barrow politely refused and said, “in our part of the world where I come from, if you cannot afford the dues, you do not join the club”.

“That is the Barbados first, to which I speak,” she told the gala.