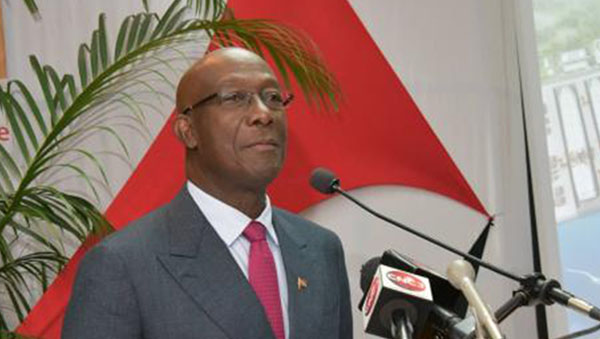 PORT OF SPAIN, Trinidad and Tobago, January 20, 2020 (CMC) – Prime Minister, Dr. Keith Rowley, today, sided with his Barbadian counterpart, Mia Mottley, of the attempt to divide the regional grouping, CARICOM, as some Caribbean leaders get ready to meet with the United States Secretary of State, Michael Pompeo, tomorrow.

“As Chairman of CARICOM, it is impossible for me to agree that my Foreign Minister should attend a meeting, with anyone, to which members of CARICOM are not invited. If some are invited and not all, then it is an attempt to divide this region,” Mottley told a gala to celebrate the centenary of the birth of the late Barbados prime minister and regional integrationist, Errol W. Barrow, over the weekend.

In a statement, Prime Minister Rowley said his administration “supports Barbados’ position, and that Prime Minister Mottley has Port of Spain’s support.

Prime Minister Rowley has repeatedly stated that Trinidad and Tobago stands “on its proud history of fairness on the world stage, ranging from opposition to apartheid in South Africa, to opposing the US invasion of Grenada”.

Pompeo, who is visiting several countries in Latin America, said his two-day visit to Kingston, from Tuesday, will allow him to meet with “many Caribbean leaders to discuss how we can all work together, to promote our common democratic values and prosperity for all of our people,” adding “I’m looking forward to a fantastic set of meetings”.

Pompeo said he would also participate in a round-table meeting with the foreign ministers of The Bahamas, Belize, Dominican Republic, Haiti, St. Kitts and Nevis, and St. Lucia.

Another issue on the table will be the current situation in Venezuela, as Washington continues to lead the efforts to remove President, Nicolas Maduro, from office in the South American country in support of the Opposition Leader, Juan Guaido..

At their summit in St. Lucia last July, CARICOM leaders agreed to maintain their position of non-interference and non-intervention in the internal affairs of Venezuela, and agreed also “that mediation-related activities would be continued to be pursued by the Prime Ministers of St. Kitts and Nevis, Barbados and Trinidad and Tobago”.

Earlier, St. Kitts-Nevis Foreign Affairs Minister, Mark Brantley, said the twin-island Federation does not regard the move by Washington, to invite some regional countries to the Kingston meeting, as a means of dividing the 15-member regional integration movement.

“I am not aware, nor has the invitation extended to me suggested, anything at all about CARICOM and, so as far as I am concerned, St. Kitts-Nevis is being given an opportunity to speak to a very high level of the US government on issues that impact us,” Brantley said.

He listed, among those issues, the Citizenship by Investment Programs (CIP), through which foreign investors are granted citizenship of the twin-island Federation, in return for making a substantial financial investment in the socio-economic development of the country.

Brantley said Basseterre would use the opportunity at the meeting to pursue outstanding bilateral issues.

“Well, the Secretary of State for the United States has extended an invitation to St. Kitts-Nevis at the foreign minister level, and we are carefully looking at that, because we have some very important bilateral issues with the United States,” he added.