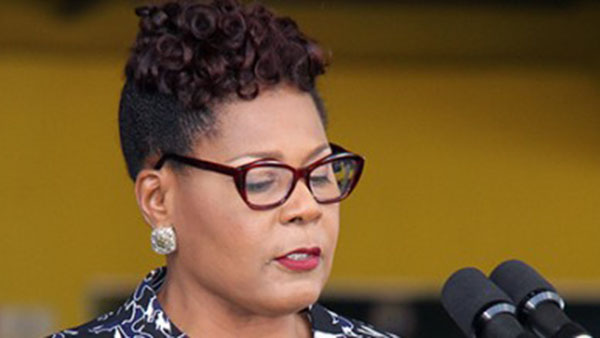 PORT OF SPAIN, Trinidad and Tobago, Friday, January 24, 2020 (CMC) – President Paula Mae Weekes Friday adopted the role of an emissary and issued a message to Parliamentarians which she members of the public “feel that neither Government nor Opposition is hearing, or if hearing, ignoring”.

And the message she said “is as simple as it is poignant, they are hurting”.

Addressing a special sitting marking the re-opening of the TT$441 million (One TT dollar=US$0.16 cents) refurbished “Red House” Parliament building in the heart of the capital, Weekes, the country’s first woman head of state, said that while her  parliamentary role, though essential, she is here “only by invitation issued by the Speaker of the House”.

But she said she was using this occasion, acting as an emissary in bringing to Parliament a message from the citizens of Trinidad and Tobago “who have entrusted to us the solemn responsibility to make such laws that would enable them to live secure, productive, gratifying and peaceful lives”.

Weekes said that she had received correspondence from members of the public on a daily basis, “complaining bitterly, in essence, that existing laws do not address their serious concerns and that some laws appear to benefit narrow sectarian interests rather than the interests of all.

“I suspect that citizens write me because they harbour the mistaken belief that I have the jurisdiction to take action directly and/or to issue orders to the powers-that-be. We assembled know better.”

She said that while Parliament and other leaders in the country are dabbling in semantics about whether Trinidad and Tobago is a failed State or in a crime crisis, “our citizens are being murdered at an alarming rate, they lack opportunities for employment or are losing their jobs, food prices are spiralling beyond the reach of many, and more and more of our children are falling into the “at risk” category.

“Citizens are entitled to look to you for and demand of you solutions to alleviate their pain. They want you to work together for their good. Even the most desperate understand the nature of politics and that some degree of toeing the party line, posturing, old talk and picong come with the territory, but at the end of the day fidelity to the people, our vulnerable women, our defenceless children, our angry young men, must be the primary and paramount concern of Parliamentarians.”

The head of state said that citizens cannot be faulted if they expect their business to be handled with complementary dignity and decorum, and with a degree of urgency.

She said that in the 22 months she has been in office, she has assented to 46 Acts of Parliament, issued 23 Proclamations, “but the man in the street, the executive in the office and the public servant in the ministry would be hard pressed to find, far less measure, any improvement in their day-to-day circumstances.

“Of course, not every Act can yield immediate or short-term results, but there needs be legislation that addresses and ameliorates promptly critical and pressing issues confronting our population.”

Weekes acknowledged that the job of a legislator can be a thankless, not for the faint-hearted or thin-skinned and even when legislation has been brought to the floor and thoroughly debated, citizens may still question its relevance, effect and impact on their daily lives.

“Legislation then is ineffective and unfruitful if it does not redound to the benefit of the citizens. I have repeated ad nauseum that citizens have an onus on them, which they can neither deny nor shirk, to contribute to their overall wellbeing.

“They have their role to play in making this country one of which they can be proud, but they are dependent on those of us assembled here to lead the way, to provide avenues and opportunities for improvement and to model desirable conduct.”

She said that Parliament sets the tone for the average man in the street and ‘if you are seen to treat each other with respect, courtesy and good humour, there can be a trickle-down effect and eventual cascade; but when acrimony, contempt and divisiveness is the example you set, you cannot be surprised when those attitudes and behaviours are replicated on the nation’s roads, in our schools and homes and on social media.

“Awesome power resides in these Chambers and citizens are entitled to expect us to work together to give them, not only their constitutional due, but also the blueprint for national conduct. Law and order, truth and justice, morality and decency—these are the values which should be associated with our Parliament,” she said, noting that soon after her inauguration, a well-established columnist referred to her as “a stern long-time, creole auntie-tantie.

“I accept that as a badge of honour since, in my experience, auntie-tanties are usually proponents of sober thinking, discipline, good behaviour and deep reflection. They often tell us what we already know and use opportune moments such as these to give timely reminders, in case we have forgot. I hope and pray that as I address this Parliament, holding myself out as a voice for citizens, it is not a voice crying in the wilderness,” Weekes told legislators.