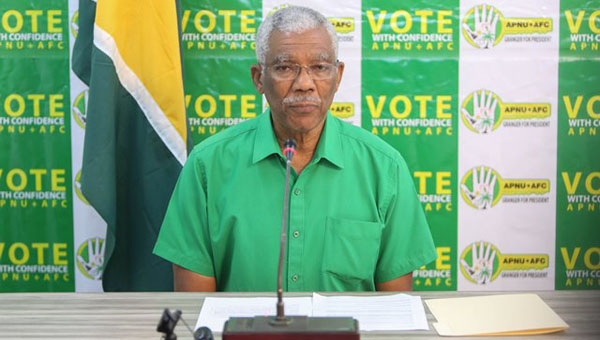 GEORGETOWN, Guyana, March 3, 2020 (CMC) – President, David Granger, appealed to supporters “to remain calm and vigilant”, as counting of the ballots started in the regional and general election, held, yesterday, over a 12-hour period.

In a brief broadcast, Granger, who led the governing coalition — A Partnership for National Unity (APNU) and the Alliance For Change (AFC) — into the election, denied having given an earlier statement, calling for the cancellation of the polls, and blamed “operatives” of the main opposition party, the People’s Progressive Party/Civic (PPP/C) for spreading “fake news”.

“I have made no statement, calling for the cancellation of the poll. I am very confident in the turnout of the people of Guyana…and we look forward to the results, which would eventuate in retuning the coalition to office,” he predicted.

“I have visited several polling stations, personally, and I have observed that voting has proceeded in a peaceful manner, we have received no reports of any interference with the normal electoral process,” stated the Head of State, noting, with concern, incidents involving another political party, which he said has been reported to the commission.

He explained that the reports stated that the party engaged in “activities, which could be deemed to be fraudulent or unlawful. These include attempts to deprive legitimate voters of their constitutional right to exercise their franchise, simply because of the colour of their apparel.”

President Granger said that the coalition will continue to monitor reports from around the country, and “we are moving forward, together, for continued progress and development of our beautiful Cooperative Republic of Guyana.”

“We are appealing to our supporters, now that the polls have closed, to remain calm and vigilant, as we await the formal declaration of results, by the Electoral Commission — the only authority to do so,” he added.

Earlier, the Guyana Elections Commission (GECOM) reported that there had been some minor hiccups in the voting process, but that they were immediately dealt with.

“Most of the issues, raised by parties, particularly party agents, have been corrected,” Chief Elections Officer, Keith Lowenfield, told a mid-morning news conference.

Meanwhile, the head of the Organisation of American States (OAS) Electoral Observer Mission, Bruce Golding, acknowledged that there had been a “few hitches”, adding “the major concern that we observe in the morning, was long lines of persons waiting to vote, and a number of voters becoming impatient, because they have been standing for a long period of time”.

The OAS is among a number of local, regional and international groups monitoring the elections, and Golding said that his group would, most probably, make some recommendations that could result in expediting the voting process, “with some minor changes, without compromising the integrity of the election”.

“But, generally, things have gone well, and at none of the stations we visited, did we encounter any disruption……very peaceful, very orderly,” he added.

GECOM said that a total of 2, 339 polling stations, scattered across the 10 regions, had been utilised during the 6am-to-6pm voting period and that an estimated 661,000 people were eligible to vote in the election.

The Commission said that it expects the results to be known, “as soon as possible”, although the law provides for 15 days, after the polls have closed.