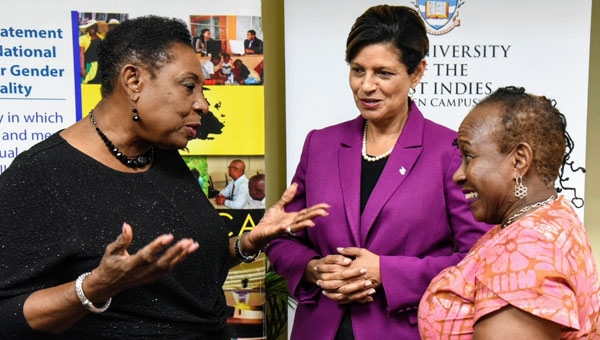 KINGSTON, Jamaica March 6, 2020 — Minister of Culture, Gender, Entertainment and Sport, Olivia Grange, says the government is working to have the Sexual Harassment Bill passed into law, by the second half of the calendar year.

The Bill, which outlines the types of conduct that constitute sexual harassment and prohibits certain related conduct, was tabled by the Gender Minister in the House of Representatives, in July, last year.

Since then, a Joint Select Committee of Parliament, which was appointed to consider and report on the Bill, has been hearing input from organisations and individuals, about how to make the law better and more meaningful.

Grange encouraged everyone – both at the personal level and in representing organizations – to contribute to further strengthening the legislation.

“We want to hear from more stakeholders. The process is, to make your written submissions to Parliament and then you will be invited to make an oral presentation,” she informed.

She was speaking at a Memorandum of Understanding (MoU) signing ceremony at the University of the West Indies (UWI) Regional Headquarters, on February 28.

Under the MoU, the government will be partnering with the UWI Open Campus, over the next three years, to provide training and research on sexual harassment in the workplace and related matters.

The Minister said focus is now being placed on some of the regulatory provisions that will make the new law more workable and more effective.

“We aim to have, in place, the legal framework to regulate workplaces, by insisting that employers create an environment that is free from sexual harassment, provide comprehensive sexual harassment policies to guide their organisations and, importantly, take immediate and appropriate action to deal with the allegations of sexual harassment when they arise,” she said.

In the meantime, the Minister called for a cultural shift in how persons view and deal with sexual harassment, in order to prevent the offence from occurring, and to eliminate it where it does.

“Sexual harassment is overwhelmingly a problem of women workers at the workplace, and invariably, is used in an unequal power relationship. So, while effective legal remedies are necessary, as a government, we have the responsibility to ensure that the unwanted, the unwelcome and offensive behaviour at the workplace must stop, and so preventative measures are especially important,” she said.