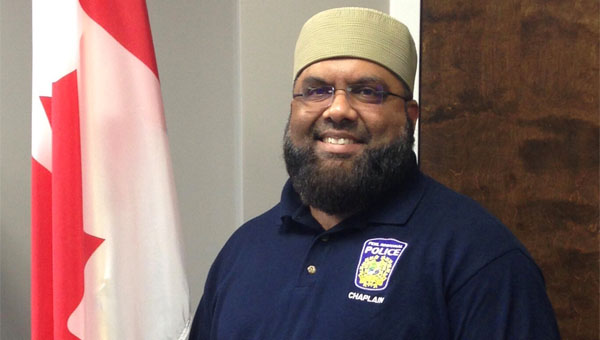 PEEL, Ontario March 24, 2020 — Guyanese-born Imam Shaykh Imran Ally, who immigrated to Canada in 2000, has recently been recognized for Chaplaincy Services, by the Peel Regional Police (PRP) — third largest municipal police service in Canada — where he is serving as its Police Chaplain.

A former student of Central High School in Georgetown, Guyana, he is the first PRP Chaplain to achieve Certification from the Canadian Police Chaplains Association, and the first Imam and Muslim Chaplain, in Canada, to receive this Certification.

In October 2019, in recognition of his continued service to first responders, he received the Chaplain of the Year Award from Badge of Life Canada (BOLC), a peer-led charitable volunteer organization, committed to supporting police and corrections personnel, who are dealing with psychological injuries, diagnosed from service. 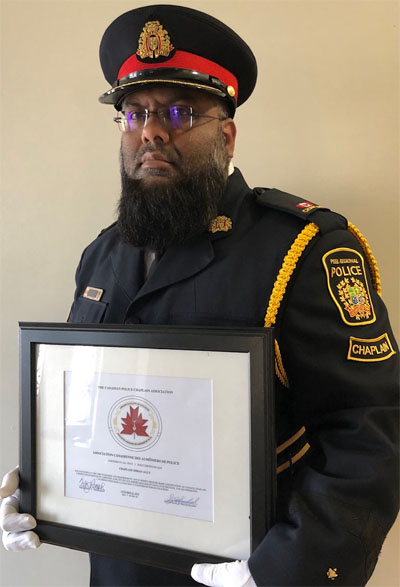 Imam Ally is the first Peel Regional Police Chaplain — and the first Imam and Muslim Chaplain, in Canada — to achieve certification from the Canadian Police Chaplains’ Association. Photo contributed.

Imam Ally graduated from the Islamic Call University, in Tripoli, Libya, after obtaining a Bachelor of Arts degree in Islamic Studies and Arabic Language. Currently, he is the Imam and resident Shaykh of the Toronto and Region Islamic Congregation (TARIC) Islamic Centre, where he has been serving since 2000.

He continues to be recognized for his expertise in inter-faith service, not only in law enforcement, but also in the Greater Toronto Area (GTA) community, at large.

It is not surprising that he is well respected in police circles, for his ability to bring members of all faiths together, since this could be attributed to the fact that Guyana, like Canada, respects the freedom of religion, and is a multi-faith society.

His charismatic speech delivery, along with his ability to establish meaningful and honest connections with diverse audiences, make him a sought-after Imam, to preside over many milestone occasions and community events.

One of the few longest-employed Imams at one mosque in the GTA, speaks volumes of Imam Ally’s abilities and approval ratings from Muslims in Toronto. He is viewed by his peers as a stalwart in inter-faith dialogue, and in the field of chaplaincy in the areas of first responders, health and educational institutions and international sports.

His role in the community encompasses being a religious guide, educator, counsellor, arbitrator, mediator, marriage officer and many more. 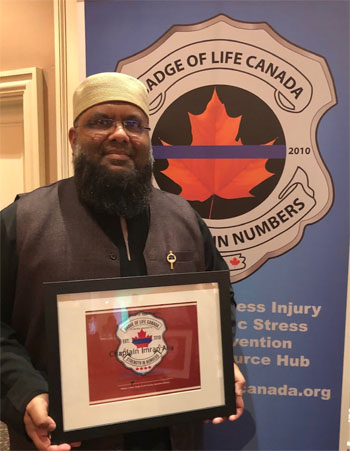 In 2019, Imam Ally also received the Chaplain of the Year award from Badge of Life Canada (BOLC), in recognition for his continued service to first responders. Photo contributed.

In 2007, Kameeza, with the support of her husband, founded “Yusuf’s Day of Hope” (YDOH), a not-for-profit fundraising initiative, named after their second son, who suffers from a rare genetic disorder.

Throughout the years, YDOH has raised over Cdn.$220,000 for the Norman Saunders Complex Care Initiative at the Hospital for Sick Children, in Toronto. The Initiative supports research and academic activity, related to the clinical care of children with multiple and complex health challenges.

Imam Ally continues to give back to Guyana, through his volunteer work, with the Central Islamic Organization of Guyana (CIOG) and participates in activities of the Guyanese Diaspora, through the Guyana Consulate in Toronto.

He has received numerous accolades and recognitions for his work and service to society, of which the most recent came from the Prime Minister of Canada.

Imam Imran Ally is joined at the PRP, by another iconic Guyanese, who is excelling in her profession, Deputy Chief Ingrid Berkely-Brown, who is the highest-ranking Black, female, municipal police officer in Canada.

In 2017, she was the recipient of the Excellence in Law Enforcement award from the Pride News Magazine-owned African Canadian Achievement Awards of Excellence (ACAAE).