New in Pride
Home / Arts & Entertainment / ON THE MOVE: Popular Gospel Group Has No Regrets Changing Direction For Higher Ground 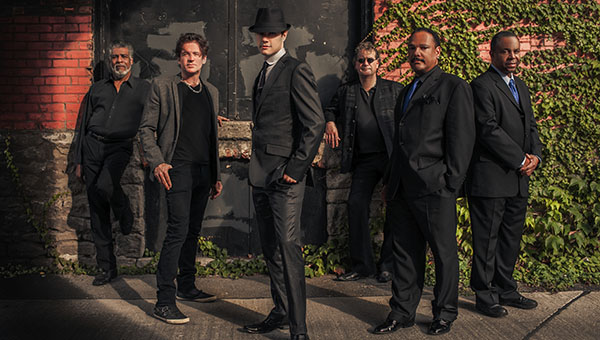 ON THE MOVE: Popular Gospel Group Has No Regrets Changing Direction For Higher Ground

Most people in the entertainment industry want fame, fortune, and brand themselves with that purpose in mind.

Members of the popular Canadian multi-racial gospel group and four-time Juno nominee Newworldson, all started out playing in bars, and probably wanted fame and fortune as well as the next musician.  But then they became Christians, which caused them to make different choices.

According to keyboard player, lead vocalist and band spokesperson Joel Parisien, as a group, they wanted to use their God-given talents to honor their Creator. Today when young people ask them the steps for success, Joel’s response is that he has no “steps” to offer. Just be faithful, and patient.

Yet patience wasn’t something the group itself had to demonstrate when it began. Formed in 2005, the original members would get together to play, because drummer Mark Rogers wanted to give Joel the opportunity to perform songs Joel had been writing for years. Newworldson began with four members. Leroy Emmanuel on guitar and vocals; and John Irvine, on bass and vocals rounded out the foursome.  In 2013 the band increased its members to six, with the addition of sax players Darryl Dixon and Dave Watson.

My telephone interview with Joel took place within a few days after the band had returned from a European trip, and with knowledge that in another two months – in Jan. 2015 – they’d be heading to New Zealand.

I learned that the group started out with “no big plans”, yet Newworldson was discovered. They had posted videos of their music, simply to share with friends online what they were doing musically.  What followed was much more than band members could have imagined!

Music executives in Nashville became aware of the group’s videos and soon enough, flew up to Canada to see them. The end result was that they were signed with INPOP Records, with the understanding that their eclectic style of inspirational music of soul and Caribbean flavors wouldn’t change.

Joel says INPOP was “confident that we’d find a fan base world-wide.” And that’s exactly what happened!

People who understand that the entertainment industry is about seeking attention for the purpose of making money, often ask why they chose to give up popular music that would more readily bring wealth, for the less lucrative gospel genre.

Take, for example, the case of lead guitarist and vocalist Leroy Emmanuel.

Leroy was a session musician for the very successful Motown record label during the 1960s. He played with the likes of Smokey Robinson, Curtis Mayfield, Dionne Warwick and Marvin Gaye, plus the world-famous Chops Horns (Alicia Keys; the Police).

According to Joel, Leroy saw “how poisonous” the culture of fame could be on people in the industry. Although it was a positive experience for talent development, there were things that became a warning to Leroy.

Joel describes the lead guitarist as the group’s “resident expert on African music from a rhythmic perspective.” He credits Leroy with helping the group extend its soul and Caribbean flavors to include African style. Joel says, “He’s a real mentor in that way; a real source of knowledge.”

Each of the very talented band members made a conscious choice that gospel music was where they wanted to use their skill.

Joel says, “There’s a faulty view that musicians have to graduate to the mainstream  market for wider recognition  He adds, “There’s a perception that music within the church is inferior to music in the secular world.” Of course, he disagrees with that notion.

“In the mainstream, you’ll be idolized. I can’t take credit for the gifts God has given me. I’d rather people recognize the source. It’s also too much pressure. I don’t believe that humans can accept that kind of worship. There’s a danger in receiving adoration in a worldly way. We (band members) get so much joy and satisfaction as it is. I get to travel around the world…..!”

The musical versatility of the band is evident, whether you’re listening to its recordings or you’re at one of its live concerts. The lyrics are uplifting for young and old alike.

The name ‘Newworldson’ was selected from Revelation 21: where it depicts a new heaven and new earth, with Jesus as ruler. The name sets the right tone for the band.

‘There Is A Way’  –  the group’s  first hit single –  peaked at number two on the Billboard Music  chart for Christian Songs in 2008. It reached number one on Christian radio in Canada, the UK and Australia, and helped to garner three of the 11 awards received from the Gospel Music Association. Among the band’s many other popular songs, are the Caribbean-influenced Jamaican Praise Medley; and the soulful Sweet Holy Spirit, reminiscent of the ‘60s era.

Although its style of music appeals to people who are over 45 due to the familiarity of the soul and funk sound in the gospel music, Newworldson also has wide appeal among gospel music fans of a younger generation.

In particular, young Christians relatively new to the faith are drawn by the eclectic music of the band – and then they’re struck by the positive lyrics. “Having so many young people listen to Newworldson”, Joel says, “We’re sensitive to the fact that young people need to see God as real, not just as God for their parents. They want God to be relevant to them in the 21st century. ”

For anyone who hasn’t sampled the music of Newworldson, you can do so at www.newworldson.com. On the site is the song Old Time Religion written by Joel, and recorded at a live concert in Australia.

Beverly Browne has been writing for Canadian publications and businesses for more than 20 years. In 2013 she published her first book entitled, How To Buy Tax Sale Properties: A Canadian Guide. The easy-to-read book teaches people how to acquire real estate from local governments through the tax sale process. She also gives workshops on the subject, for people who want to jump-start their efforts. Bev can be reached at admin@accessprofits101.com for more information on real estate through tax sales, or if you want to respond to this column.