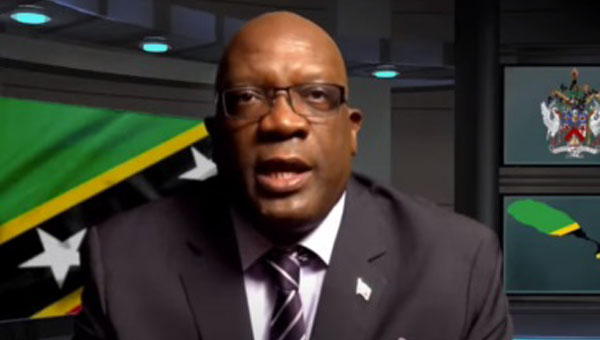 BASSETERRE, St. Kits-Nevis, May 25, CMC – Prime Minster, Dr. Timothy Harris, declared, last Friday, that the borders of the twin-island Federation will remain closed, effectively dashing the hopes of overseas nationals, who would have wanted to travel, here, to cast their ballots, as had been the case in past general elections.

In a radio and television broadcast, Harris said that the general election will be held on June 5, as the country continues with its efforts to curb the spread of the coronavirus (COVID-19), even as he announced that new regulations would have come into force, last Saturday, replacing those that expired on the same day.

He announced that the new regulations would remain in force until June 13, and that the nightly curfew remains in place and must be adhered to.

Harris told the nation that his Team Unity administration, which will be challenged by the main opposition, the St. Kitts-Nevis Labour Party (SKNLP), for control of the 11 seats in the National Assembly, ”is committed to keeping our people safe”.

“Indeed, that has been our first priority. But we have also been a government that has been committed to the rule of law. Our Constitution requires us to hold an election, to choose representatives to sit in Parliament and form your government, once Parliament is dissolved.

“COVID-19 forced us to adjust the way we are accustomed to campaigning and bringing our ideas and vision to influence, to select the candidate of their choice. Our medical experts have strongly advised against mass gatherings, which are fertile ground for the transmission of the disease, by asymptomatic persons,” he said.

He said that as a result those vying for seats in the Parliament are resorting to innovative ways to bring their programs to the voters.

“Virtual campaigns, social media, and other innovative and creative ways are the new normal. When we visit residents in constituencies, we ask that candidates, campaigners and supporters follow the social distancing protocols. That is good for all of us.

“I urge all of us to pay attention. Our people must continue to behave, responsibly. We have to be mature and keep the peace, at all times. I expect that the Supervisor of Elections and the Electoral Commission will be advised by the medical experts and thus ensure that registered voters will be safe, when they go to vote.”

But Harris insisted that the strict guidelines that his government initiated, some weeks ago, have, so far, proven to be effective; and they have allowed the country to flatten the curve, with respect to the coronavirus.

“Our borders will continue to remain closed to international commercial flights and visitors, so as to prevent and/or delay the possibility of importing any new cases. We are concerned that our ally, the United States of America, has become a hotspot for COVID-19. Many of us are concerned about the rate of infection in New York, in New Jersey and Florida,” he said.

He added that there is a procedure that has been established and is in practice, which must be followed, if requests for entry are made.

“Anyone entering our country must go through a mandatory or a compulsory quarantine period up to a minimum – I stress, up to a minimum – of 14 days, after which they must be tested and, if found to be negative, they will be reintegrated in the community.  If they are found to be positive, they will have to be isolated, until they are fully recovered, as per World Health Organization’s guidelines.”

Harris said that while his heart “grieves for those of our citizens, there and everywhere, who have contracted the virus and who have died after contracting COVID-19, we must do all we can to keep safe, avoid spreading the virus, by adhering to well-established protocols”.

“Lives are at stake. Let’s not take COVID-19 lightly. My government has a solemn duty to protect our population from all harm. All that we are doing is about you and for you – your health, your wellbeing, your lives and livelihood,” he said, urging the population to cooperate with the medical experts and the security forces “for our collective good”.

The SKNLP has called for a repeal of the state of emergency, saying that it seriously hampers the ability to campaign in the days leading up to the general election.