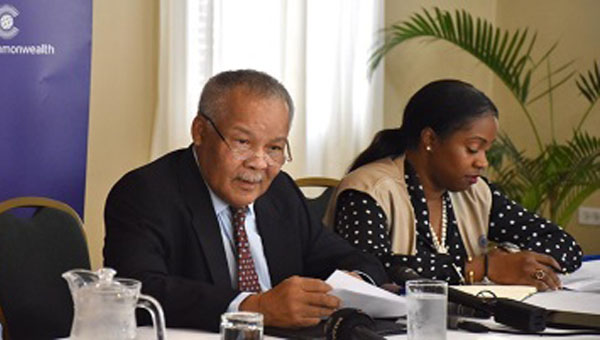 GEORGETOWN, Guyana, June 12, 2020 (CMC) – The Head of the Commonwealth elections observer group that scrutinised the disputed March 2 election in Guyana, Owen Arthur, has defended the statements, made by St. Vincent and the Grenadines Prime Minister, Dr. Ralph Gonsalves, regarding the outcome of the recount of ballots from the elections.

Gonsalves, speaking on a radio program in Kingstown, said he remains satisfied that the 15-member Caribbean Community (CARICOM) grouping “will not stand by idly, and watch the recount, which is properly done, for the results to be set aside”.

“We expect the CARICOM observer mission to deliver its report, and we expect that what is the recount would be honoured, and the Guyana Elections Commission would honour that recount and declare the winner, in accordance with this recount,” Gonsalves told radio listeners.

But the governing coalition — A Partnership for National Unity (APNU) and the Alliance For Change (AFC) — said that it is concerned, as Dr. Gonsalves, who assumes the Chairmanship of CARICOM on July 1, has chosen to pronounce on a process that is still ongoing, and proposes to a direct constitutional body in another CARICOM Member State, in the execution of its duties.

APNU+ AFC Campaign Manager, Joseph Harmon, said the coalition finds it “strange and alarming” that Gonsalves would make statements of this nature, which closely resembles that of the main opposition party.

But Arthur, a former Barbados Prime Minister, told the Guyana-based News Room media outlet, that the statement by Gonsalves “is perfectly in order, and is exactly what is expected”.

He said Caribbean countries, including Guyana, have signed a Charter for Civil Society, “which enjoins upon them, the responsibility to have free and fair elections.

Owen posited, the statements, by Harmon and the APNU, is putting President David Granger in a position, “where, I believe, it would be very difficult for them to be able to engage in fellowship, of goodwill, with other people in the Caribbean”.

“The vitriolic attack on other leaders is really, in a way, putting Guyana in a condition, where it appears to have (isolated) itself, by people, who are out of order. Mr. Harmon cannot be allowed to indulge his appetite, to be attacking leaders,” said Arthur, adding, if there is an issue at the level of leaders, “one would expect that leaders of the Caribbean would have to be spoken to, with respect”.

He pointed out that it would be for President Granger, and not Harmon, to be speaking to regional leaders, and that the Head of State should remind Harmon of that responsibility.

“I don’t think Ralph Gonsalves should feel in any way, first of all, intimidated or having to cower, because that seems to be the intention,” Arthur said, adding “there is a Charter of Civil Society, under which Guyana has signed, to bind itself to the free and fair elections, and Gonsalves is calling for Guyana to respect that Charter of Civil Society that holds us together as a community”.