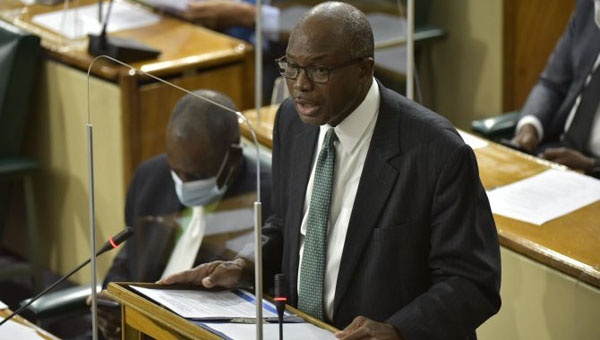 Minister without Portfolio in the Ministry of Economic Growth and Job Creation, Everald Warmington, makes his contribution to the 2021/22 Sectoral Debate in the House of Representatives, on May 5. Photo credit: Donald De La Haye/JIS.

KINGSTON, Jamaica (Friday, May 7, 2021) — Minister without Portfolio in the Ministry of Economic Growth and Job Creation, Everald Warmington, says several legislative amendments are being undertaken to support the implementation of an electronic land registration system.

Making his contribution to the 2021/22 Sectoral Debate in the House of Representatives on May 5, Warmington said, drafting instructions were issued to the Chief Parliamentary Counsel for amendment of the Registration of Titles Act and Registration (Strata Titles) Act, Land Surveyors Act, Transfer Tax Act, Stamp Duty Act and the Legal Profession Act, to provide the legislative framework to support the implementation of an electronic land registration system.

He noted, too, that amendments were made to the Regulations, under the Registration of Titles Cadastral Mapping and Tenure Clarification (Special Provisions) Act, to reduce fees, to make land registration services more affordable to poor landowners.

“The amendment is aimed at accelerating land registration in Jamaica, and the delivery of 20,000 new titles, within three years, by the National Land Agency,” he said.

Meanwhile, he pointed out that the Electronic Titling Project, which is being partially-funded by the World Bank, under the Foundations for Competitiveness and Growth Project, is expected to be implemented, three years after the selection of a suitable vendor and the commencement of the digitising of volumes of existing titles, which is a priority for the 2021/2022 fiscal year.

The objective of e-titling is to improve efficiency in the land registration process in Jamaica, when all title records are issued and updated in an electronic format.

He said, during 2020/21, the first draft Bill of the amendments to the requisite legislation, the Registration of Titles Act, was submitted by the Chief Parliamentary Counsel (CPC) to the NLA Consultant for review.