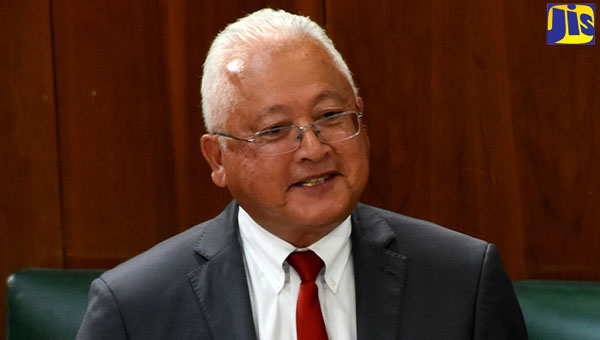 Jamaica's Minister of Justice, Delroy Chuck, makes his contribution to the 2020/21 Sectoral Debate in the House of Representatives on June 24. Photo credit: Mark Bell/JIS.

KINGSTON, Jamaica, June 30, 2020 (CMC) – Justice Minister, Delroy Chuck, has apologised, “unreservedly”, for the inappropriate remarks he made, during a discussion of the issue of sexual harassment, at a sitting of the Joint Select Committee on the Sexual Harassment Bill, last week.

The Justice Minister told the Committee that victims of sexual harassment either report the matter, within the one-year time frame, or forget about the matter.

“We don’t want the situation that now happens in the ‘Me Too’ movement in the US, where, 30 years later, you talk about ‘I was harassed in the elevator’,” a chuckling Minister Chuck told the members of the Committee, adding “if you don’t complain within 12 months, please, cut it out”.

But he came under criticism, from sections of the population, after the comment was made, last Thursday, with some indicating that he should have stepped down as Justice Minister.

But even as he was quick to apologise for his “joviality”, which had been taken as “a lack of empathy”, Chuck issued another apology on Saturday, explaining, “when I queried what time limit would be appropriate, I made remarks about the #METOO movement.

“I, unreservedly, apologise to anyone, who found my remarks inappropriate, as I never intended to disrespect the #METOO movement or to diminish the seriousness of the emotional trauma, caused by sexual harassment; but, on reflection, I understand the concerns raised by members of the public.”

Chuck said, he fully recognised the courage and strength of victims of sexual harassment, who speak out against offenders, and stated that, in fact, in his other contributions to the discussion, he encouraged women to report and bring criminal charges against men, who touch them, without invitation.

“If persons interpret my joviality as a lack of empathy, it was not meant, and never intended to undermine the severity of the matter, at hand. I do appreciate that sexual harassment is a serious and traumatic subject.

“As Minister of Justice, I do take my role seriously, to ensure lawmakers give the issues their full attention and consideration,” he added.