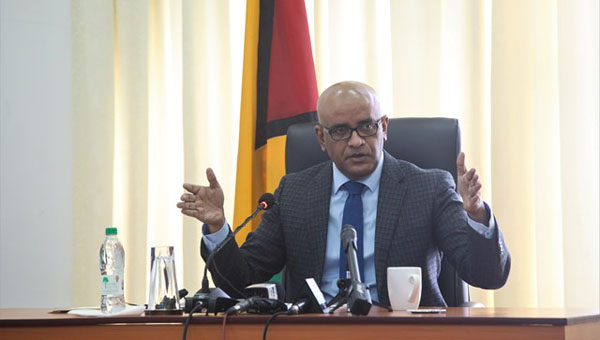 Guyana's Vice President, Dr. Bharrat Jagdeo, disclosed that the Administration has extensive proof of the Coalition's land giveaways that will be provided at the appropriate time. Photo credit: DPI.

GEORGETOWN, Guyana (Thursday, November 19, 2020) — Vice President, Dr. Bharrat Jagdeo, has accused officials of the APNU+AFC Coalition, which is the republic’s Opposition, of being fixated on defending the illegalities, committed during their five-year tenure.

Instead of being outraged at the unlawful acts, he also claimed, during a recent interview with NCN, that the Coalition is prodding on, particularly those, who have benefitted from illegal transactions.

The Coalition has been accused of distributing massive prime, commercial and agricultural lands in the village of Ogle, on East Coast Demerara; Peters Hall, East Bank Demerara; and the Wales Estate, West Bank Demerara, particularly during the course of its caretaker status, following the December 2018 no-confidence motion vote.

The government has promised that persons, who return those lands, will not face legal action. However, Dr. Jagdeo said, Coalition officials are believed to be dissuading persons from cooperating.

“Here is a party that is saying that a person can get a billion dollars’ worth, based on their valuation owed, that is vested already and that persons must not give up the land. They are defending the illegalities and that is what APNU is about doing now,” he said.

The Vice President surmised that Coalition officials may be acting in such a manner, because many of them were part of the “illegality”.

“…because they were the lawyers or beneficiaries of the illegality and all of that will unfold in the future. Their position should be, where there is illegality, people should face the music. That is what we were saying while in Opposition. If there is illegality committed by the PPP, people will have to face the law.”

Dr. Jagdeo said the Administration has extensive proof of the land giveaways that will be provided at the appropriate time.

“What we have seen and what we know, amounts to great malfeasance in office, and it is unbelievable. It is criminal behaviour, with no regard for any impunity. I don’t even believe that some of these people thought that these transactions would ever see the light of day. That is the only reason that they pursued them,” he added.

The Vice President said every Guyanese, of every race and political persuasion, would be outraged at the Coalition’s behaviour, since the land belongs to the people.