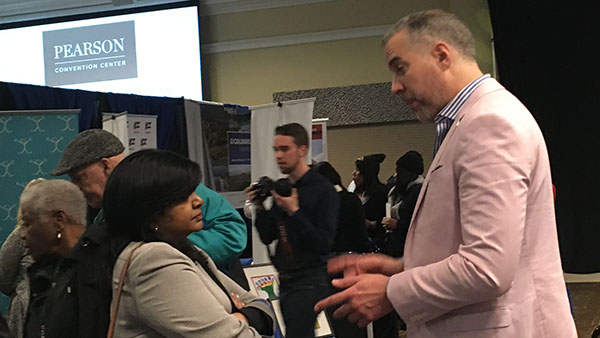 BRAMPTON, Ontario March 28, 2017 — If the long queues at the more than 20 exhibitor booths, inquisitive attendees, and steady flow of people attending the first Jamaica National Group Expo, throughout its seven-hour duration, were any indication of success, then the organizers achieved that in a major way.

Held last Saturday, at the Pearson Convention Centre in Brampton, Ontario – a city with a large population of Jamaicans — hundreds of Jamaican-Canadians and friends of Jamaica living in the Greater Toronto Area, turned out for information about investment opportunities in the island, and more.

Some came to apply for, or to renew their Jamaican passports, as representatives of the Passport, Immigration and Citizenship Agency were there to help with the procedure and a photographer was on hand to take the required passport-sized pictures, thus completing the application process.

Others brought old birth certificates that were no longer being accepted in the island, to apply for new ones and did other transactions at the Registrar General’s Department booth.

Still many more were there to find out about property ownership, represented by several exhibitors of housing developments in Jamaica.

Hosted by Jamaica National’s Canada Representative Office, the event started at 10 a.m. and ended at 7 p.m. and showcased the various products and services of the Jamaica National Group, Jamaican government agencies, companies, and not-for-profit organizations. 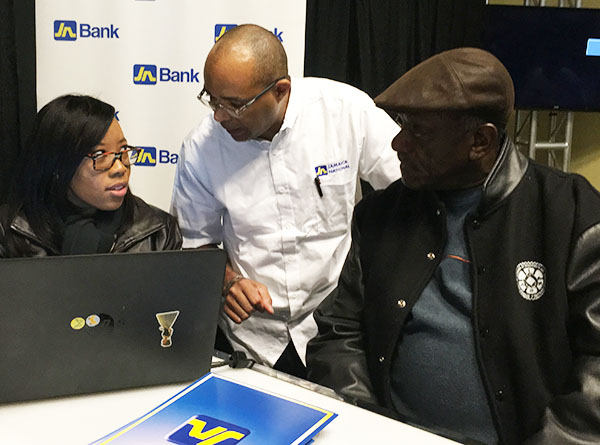 There are now two holding companies – one for financial assets, the other for non-financial assets – and out of that are the subsidiaries, which includes JN Bank.

Johnson said, a virtual JN office will be established in downtown Brampton in April.

Speaking at the event, Brampton Mayor, Linda Jeffrey, welcomed the expo to the city, noting that in a few years Brampton will have a new university – Ryerson – and is a city attractive for investments.

Leon Mitchell, Chief Marketing and Sales Officer for JN Group, said the purpose of the event was twofold.

“We want to make sure that we remain relevant to people overseas, family, friends, relatives of Jamaica, so we felt the only way to really show that is to put on a little expo, show all of our products and services, and also take an opportunity to introduce the bank,” he added.

He said the bank is not a replacement for the building society, but it enables JN to do other products and services.

“Therefore we’re now going to be able to support all of the needs and wants, as it relates to banking and financial services from our members, and family, friends overseas,” he said.

Asked if JN will maintain a presence in Brampton, given its large Jamaican community, Mitchell said, “What we’re going to do next is going to be big, and we’re going to make sure that we support the people in our community of Brampton in the right manner. Don’t forget the key to this is to listen to what they want. It’s not about what we want, but it’s making sure that we understand, interpret, and offer our family and friends in Canada the best service for them.”

Janice Miller, Jamaica’s high commissioner to Canada, was impressed with the level of enthusiasm shown by Jamaicans.

She said the expo was only a sample of what Jamaica has to offer and underscored the importance of the upcoming Jamaica Diaspora Conference in Kingston from July 23-26.

The high commissioner told patrons that the event in Brampton was an opportunity to learn more about what is happening in Jamaica and how they can become involved.

He said JNBS was restructured as of February 1, 2017, noting that: “Today, the Jamaica National Group, with its holding companies for financial and non-financial services, as well as our new, JN Bank, ‘Jamaica’s first members-owned bank’, JN is now better poised to serve its members, locally and around the globe.”

The sponsors of the event included G98.7 FM, CMJ Entertainment, and Power 106 that broadcast the expo live, through radio host, Dervan Malcolm, who flew in from Jamaica to cover the event. 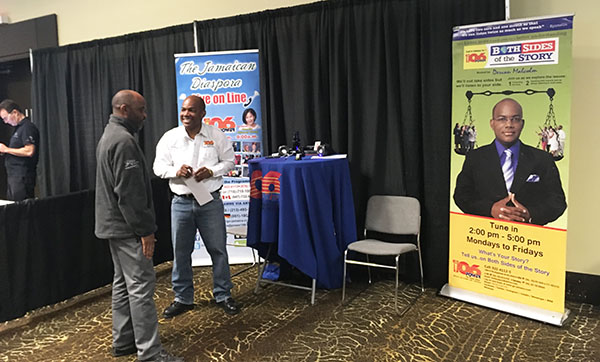 Dervan Malcolm(right), of Power 106, flew in from Jamaica to cover the event live on his Jamaica Diaspora program, Both Sides of the Story. Photo by Neil Armstrong.

The patrons were also entertained throughout the day by La’ Riatsila Dance Theatre, storyteller Letna Allen-Rowe, known as Ms. Letna, and artists, Steele, Ammoye and others.

The new Jamaica National Group song was also shared with everyone inside the convention centre.