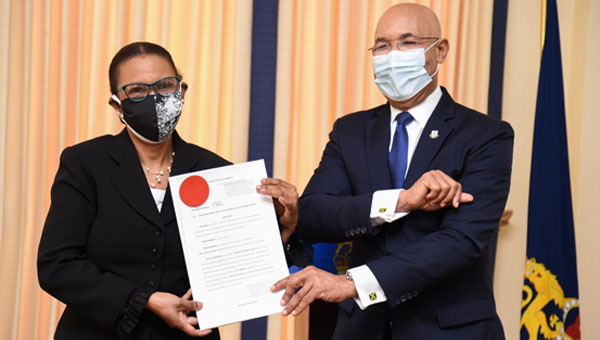 Jamaica's Governor-General, Sir Patrick Allen (right), congratulates Justice Marcia Dunbar-Green, who has been appointed to act as Judge of the Court of Appeal. She was presented with her Instrument of Appointment, during a swearing-in ceremony at King’s House on today. Photo credit: Adrian Walker/JIS.

KINGSTON, Jamaica (Monday, January 18, 2021) — Justice Marcia Veleta Dunbar-Green has been temporarily appointed to the Court of Appeal, from today to March 26.

She was sworn in by Governor-General, Sir Patrick Allen, during a ceremony at King’s House, today.

In his address, the Governor-General congratulated Justice Dunbar-Green and wished her success in her undertaking.

“We wish you well. We wish you strength, energy and fortitude of mind, body and spirit, so that you can execute your duties to make, not just the judicial system a better system, but also all Jamaica will benefit from your service,” he said.

Justice Dunbar-Green was previously appointed to act as Judge of the Court of Appeal, from September 16 to December 18, 2020.

Meanwhile, President of the Court of the Appeal, Justice Patrick Brooks, welcomed her return, noting “we are confident that she will enhance the court in carrying out its mandate”. 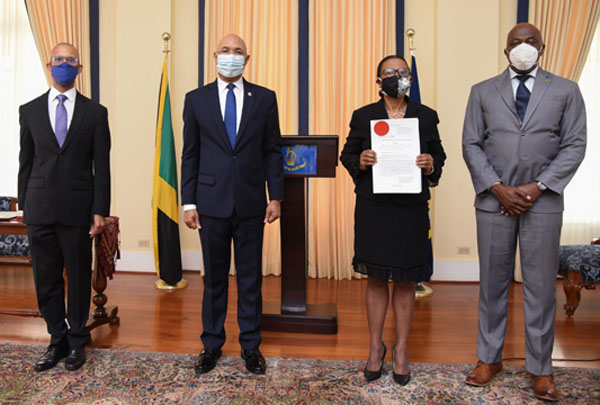 “Your Excellency, you have sworn in one of the most promising members of the judiciary. That promise is built on a body of experience and expertise, which has enabled Justice Dunbar-Green to be justly entitled and entrusted to the authority of a judge of appeal,” he said.

For his part, Chief Justice, Bryan Sykes, commended Justice Dunbar-Green, noting that she will undoubtedly contribute to the jurisprudence in the Court of Appeal.

“She has risen like a meteor. In six years of arrival in the Supreme Court, she is in the Court of Appeal and, what has caused this elevation, is her work, her worth, the quality of her writing and the manner in which she presides in court.

A decisive, no-nonsense person, who has no outstanding judgments in the Supreme Court, and this has been one of her trademarks. She completes the judgments within an acceptable time frame,” the Chief Justice noted.

In her response, Justice Dunbar-Green expressed appreciation for the confidence placed in her.

“I am delighted to be afforded this opportunity to continue my public service as a member of the judiciary, and I assure you that I will work, conscientiously and consistent, with the Oaths I have taken here, today,” she said.