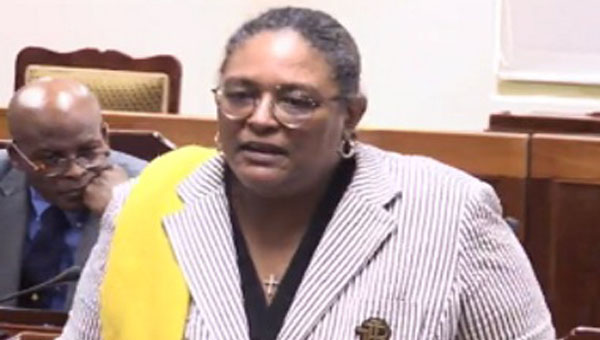 Economy Has To Be Rebuilt From Scratch, Again, Says Barbados PM

BRIDGETOWN, Barbados (Thursday, January 28, 2021) — The government will have to rebuild the country’s economy from scratch again, as it has been seriously impacted by the COVID-19 pandemic.

Prime Minister, Mia Amor Mottley, shared this prediction with the nation, on Tuesday night, as she spoke about the additional measures to be introduced, over the next three weeks, aimed at reducing the number of persons testing positive for the virus.

Mottley told her audience: “Jah knows that we have to rebuild this economy from scratch again, but I feel we can do it. That is the difference, because having done it once, I know we can do it twice. But what I cannot do is bring back those three people, who have passed.

“I ask all Barbadians to recognise that we are in this together. Life has always been valued in this country. There are many nations, across the world, who have lost hundreds, thousands…. We have lost 10, but for us, that is 10 too many. We can’t guarantee that we won’t lose others, but we’re going to guarantee that we fight like hell, not to lose any.

“What will it cost us? Probably a significant amount, probably close to $20 or $25 million, over the next two weeks…and probably deeper, in terms of wider economic impact.”

The Prime Minister said when she and her team had discussions with the International Monetary Fund’s Fiscal Affairs Mission, on Monday, they stressed that they must spend what was necessary to deal with the situation.

“We must spend what we will; we shall keep the receipts and be accountable. … We will not sacrifice people at the altar of expediency, or at the altar of simply trying to hold on to a dollar that is likely to be lost, because of the level of deaths in the long run,” she insisted.

Mottley revealed that the Minister in the Ministry of Finance, Ryan Straughn; Minister of Energy, Small Business and Entrepreneurship, Kerri Symmonds; Minister of Agriculture, Indar Weir; Minister of Maritime Affairs and the Blue Economy, Kirk Humphrey; and Minister of Environment, Adrian Forde; met on Tuesday to look at what assistance could be given to vendors, since they would be affected by the national pause period, to be introduced in the country from February 3 to 17.

Government, she pointed out, would have to put a package in place to assist them, and noted that the details were still being worked out.

“For this period of time, the government would try to meet you part of the way, by making sure that we can get something to you. We don’t know if we’ll be able to get it to everybody before we start, or during while we start, but we will get it to you,” she assured.

The Prime Minister indicated that government’s mantra is safe people, safe work, safe country and, therefore, choosing to save lives must be the first objective.

She added that the second must be to ensure people did not become so seriously ill that they had to be placed in the Intensive Care Unit. Therefore, she emphasised the importance of finding sick persons early, and urged those, who might be feeling unwell, to report it.