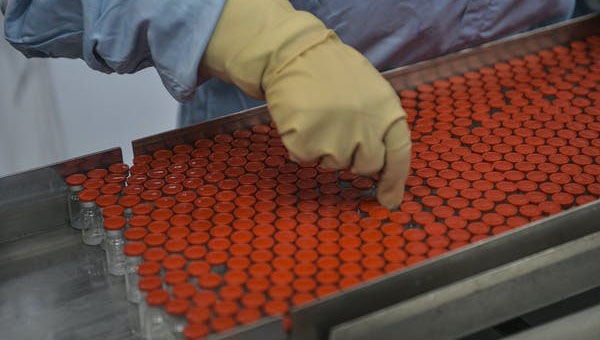 A technician works with the Soberana 02 COVID-19 vaccine at the packaging processing plant of the Finlay Vaccine Institute in Havana, Cuba, in January 2021. Photo credit: Yamil Lage.

How Cuba Is Getting So Much Right On COVID-19

As the COVID-19 pandemic disproportionately harms underprivileged people globally, Cuba’s “people over profit” approach has been saving many lives — both on the island and abroad. From the onset, Cuba’s approach has been holistic and integrated.

Its response is among the most respected in the world. Widespread confidence in the Cuban government’s science-based policies, public service media messaging and volunteerism are key reasons as to why Cuba has been able to control the viral reproduction rate until mass vaccination begins.

The cash-strapped Caribbean island risked opening to holiday visitors at the end of 2020 and is currently managing higher COVID-19 caseloads than ever before. Its health experts are combining international clinical trials of its vaccine candidates with mass production. Cuba is the only Latin American country with the capacity to manufacture a vaccine domestically other than Brazil, which is not doing so. Cuba aims to protect its populace, then give away or sell its vaccines abroad.

Before the virus’s arrival in Cuba, the country prepared for mitigation based on best practices from Asia and its own expertise with contagious disease.

Beyond Cuba’s borders, its medical diplomacy took over. Cuba’s
Henry Reeve Medical Brigade has been fighting the pandemic in at least 37 countries and has been nominated for a Nobel Peace Prize. When COVID-19 stranded the cruise ship MS Braemar, only Cuba allowed it to dock.

Hard work, hard science
Care in Cuba is universal, research and training is robust and disease and disaster mitigation is well-organized. The public health-care system is co-ordinated across research institutes and centres of disease control, through to dispersed local neighbourhood clinics. Cuba also has a near 100 per cent literacy rate, with much attention paid to science, technology, engineering and mathematics (STEM) education.

Cuba’s achievements are the result of hard work and hard science in a not-for-profit system. The populace’s confidence has been earned through science-based campaigns against the likes of HIV, Ebola, dengue fever and the Zika virus.

Nations that have responded well to the pandemic have communicated clearly and factually with their people. Cuba has a tradition of multi-pronged public-service messaging.

The country’s epidemiology director has become a trusted household expert through his daily news reports. Every day at 9 a.m., a seated and masked Dr. Francisco Durán speaks directly to the public, noting and lamenting every fatality, detailing disease spread and treatments, answering viewer questions and sternly advising continued adherence to preventative measures.

In cartoons, angry “red meanie” viruses are drowned by hand-washing and blocked by face masks, animation heroes celebrate International Workers’ Day from their balconies, youngsters stay home to protect their grandparents and families play inside together. The socially distanced 42nd International Festival of New Latin American Cinema featured animated doctor’s orders in its promotional video. Ubiquitously stated, sung and danced slogans include “Cuba for life, with a new (masked) smile.”

Mask-wearing is popular
I surveyed residents of Havana online and later in-person while in Cuba in December and January. Most reported wearing masks to “protect others and myself.”

While masking has been broadly politicized elsewhere, Cuba mandated masks in March 2020, immediately sharing instructions on how to make them at home.

Medical students have gone door-to-door checking for symptoms. Computer science students have developed helpful apps and supported medical staff in their dorms-turned-quarantine centres. Necessary work got done while public buy-in solidified the mitigation efforts. The initial growth curve was inverted early on.While in many countries volunteers struggled to find ways to help, in Cuba, existing organizations such as neighbourhood watches and universities quickly moved into action.

But family visits led to outbreaks, as they have globally. Some visitors, many of them arriving from areas with high rates of infection and science denial such as Miami, breached the requisite protocols: one PCR test with a negative result upon arrival, a five-day home quarantine and another negative PCR test before mingling.

Pandemic has been costly
All indicators show Cuba has put its limited resources to efficient use for the public good. But especially coupled with former U.S. president Donald Trump’s tightening of the American blockade against Cuba, the pandemic and the resulting plunge in tourism are costly. Scarcity of affordable food and consumer goods, along with an increased cost of living accelerated by a long-overdue monetary unification, have increased stress levels.

Daily cases are also now hovering around 850 compared to 42 on Nov. 15, 2020 — just before Havana’s airport reopened. Although the curve is again flat — exponential growth has been halted for the second time — medical personnel and supplies are strained. Against this backdrop, however, there are Cuba’s advances on the vaccination front.

In this breakneck race, Cuba is simultaneously running Phase 3 international clinical trials of Soberana (Sovereignty) 2 and, planned for late March, Abdala, with robust production of these vaccine candidates. Work is also continuing on Soberana 1 and Mambisa.

Looking ahead to COVID-19 variants and reinfections, a booster Soberana Plus is now being developed.

If Cuba’s vaccination program is successful, the country will have once again provided for its people against enormous odds as it produces and distributes a vaccine domestically, then shares it with the world.

Many market-driven, rich nations of the Global North, including Canada, are not so well-positioned. Cuba’s access to internationally produced vaccines was highly improbable due to the U.S. blockade. Its ensuing decision to make its own vaccines stands to pay off handsomely.

Jennifer Ruth Hosek is a Professor in Transnational Studies at Queen’s University, Ontario.