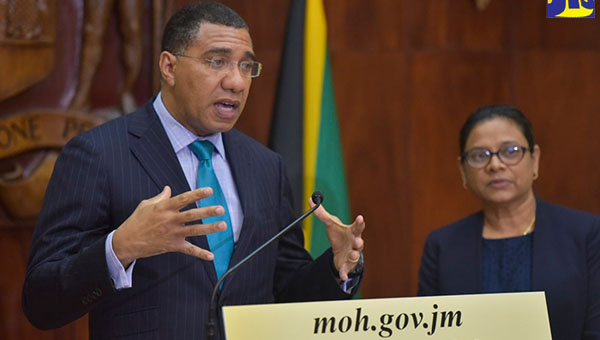 Holness, speaking at a news conference, here, said that the curfew would begin at 8.00 pm (local time) and end at 6.00 am, and would be in place until April 8.

The Prime Minister said that there would be various restrictions linked to the curfew, including the restrictions on public transportation, and appealed to citizens “to make the necessary arrangements, so they can be off the roads”, during the curfew period.

He said that all the measures under the curfew would be published in the official Gazette, today.

Holness told the public to be prepared for a “significant increase” in the number of cases in Jamaica, given that it is more than 20 days since more than 3,000 persons had entered the island.

Holness said he was certain that not every one of those people had engaged in self-quarantine and may have been “all over the island”.

He added that not everyone had been adhering to the social distancing rules.

Health Minister, Dr. Christopher Tufton, said that, to date, Jamaica has recorded 36 positive cases of the virus and 51 persons remain in isolation and 34 in quarantine in government facilities.

Tufton said that of the new cases, there were two people with travel history and one still under investigation, while a 45-year old health worker had become the first front-line worker to test positive for the virus that has killed more than 20,000 people, worldwide, since it was first detected in China, last December.

Tufton noted that “It is very important that the population understand that COVID-19 is a disease…but it can be treated,” adding, people who have been treated should, therefore, not be shunned.