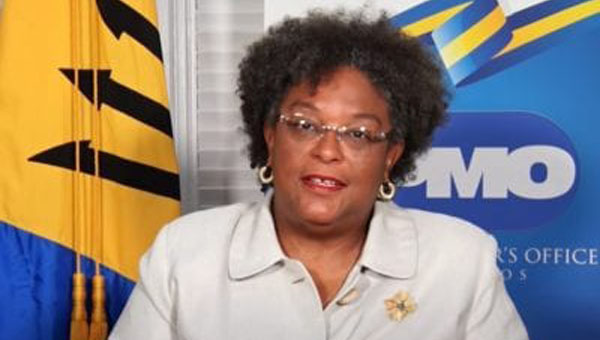 Prime Minister of Barbados and Chair of the Joint World Bank-International Monetary Fund Development Committee, Mia Amor Mottley, speaking at the 53rd Session of the Conference of African Ministers of Finance, Planning and Economic Development, yesterday.

BRIDGETOWN, Barbados (Tuesday, March 23, 2021) — Prime Minister, Mia Amor Mottley, highlighted reaching a clearing arrangement for excess orders of COVID-19 vaccines, as one of the steps that can be taken, to ensure developing countries receive their share of the vaccines.

While delivering the keynote address, online, today, at the opening of the 53rd Session of the Conference of African Ministers of Finance, Planning and Economic Development, in Addis Ababa, Mottley said the vaccine arrangement was needed, as countries battled to obtain vaccines for their citizens.

“Some long-term solutions have been suggested, that are worth serious consideration. One step we can also take is to reach a clearing arrangement for excess orders of vaccines. We should require written “clearing” agreements from those, who have ordered more than they need.

“Once those vaccinated exceed the herd immunity threshold, they would agree to retain some more modest surplus and ask the producers to produce and deliver the excess, at cost, to developing countries.

“And even then, we are at the back end of the queue. Those excess vaccines should be over and above the amounts agreed to, under COVAX, which only deals with 20 percent of our populations.  There must be early intervention,” she insisted.

The Prime Minister said vaccinating only a part of the world’s population would not work, as it would provide fertile ground for vaccine-resistant variances.

“In times of war,” she told her audience, “vital markets, subject to speculation, hoarding, and price gouging, are rationed and not left to market forces. Market power is at play here, and I tell you because we are in the middle of it”.

“Some large countries have purchased five times or more vaccines than they need, using complex, opaque option arrangements that make it hard for vaccine producers to plan and to sell further production. So much for debt transparency. Small buyers do not even get a look-in,” she asserted.

Mottley reiterated that vaccinating the world could not be left to unchecked market forces. What was needed, she stressed, was a global approach and global leadership to vaccination, rooted in strategic, moral imperatives.

The Prime Minister stated that to scale up the resource transfer, needed to address COVID and climate change, rich countries were being called on to pledge half of their new and unused Special Drawing Rights (SDRs), to recapitalise development banks, such as the African Development Bank, the Inter-American Development Bank, and the World Bank.

“They must use this capital to leverage more long-term lending to those heavily-impacted by COVID and the climate crisis, to support green, resilient and inclusive development….

“But it is not just the level of lending that matters, it is also the speed, with which it is lent. Our needs are immediate and the development banks have been well-meaning, yes they have been. But they have been slow, with lending, tied up in efforts to draw up conditionalities, and with the staff blaming their Boards, in many instances… The development banks and their Boards must commit to the timing of their disbursements,” she indicated.