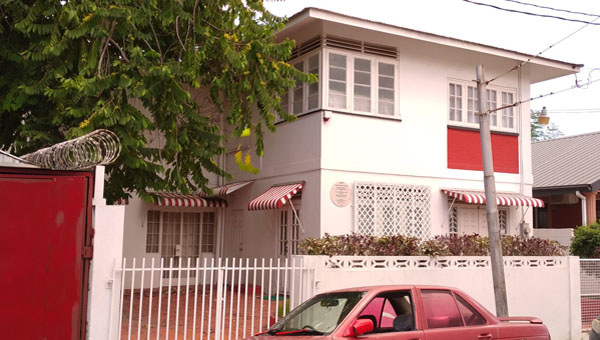 The home, where Trinidad and Tobago-born literary giant, V.S. Naipaul grew up, still stands intact, today, at 26 Nepaul Street in St. James, and is described in his classic novel, A House for Mr Biswas (1963). Photo contributed.

For the second year, it ran entirely virtual and online, due to the COVID-19 pandemic.

I have attend the event, every year since its inception in 2011, soaking up the buzz of activities with local, regional and international writers, readers, publishers and critics of literary and non-fiction works.

Founder and director, Marina Salandy-Brown, must be commended for this initiative, piloting it for 10 years, and developing it into the Caribbean’s premier, annual literary festival.

But, Indo-Caribbean culture has always been marginalised in the Bocas Lit’ Fest, as well as in CARIFESTA (Caribbean Festival of Arts0 –a topic that has been explored in another article, published elsewhere. indocaribbeanpublications.com/2018/07/30/is-the-bocas-literary-festival-biased/

On Saturday, the Indo-Caribbean-built heritage in Trinidad received a rare treat with the premiere of a special half-hour film entitled, Port of Spain: A Writer’s Heaven. The film features sites in the capital city, which have been captured in classic and contemporary literature, and was hosted by Wendell Manwarren during a walking tour of the city.

The film took its title from a quote by Derek Walcott’s famous Nobel Prize speech: “Port of Spain….a downtown babel of shop signs and streets, mongrelized, polyglot, a ferment without a history, like heaven. Because that is what such a city is…..a writer’s heaven.”

Among the several sites, in and around Port of Spain, highlighted in the film, two of them were of special interest: the birthplace of novelist, Ismith Khan, and V.S. Naipaul’s House in St James.

Ismith Khan’s House in Port of Spain
The novelist, Mohamed Ismith Khan (1925 – 2002), was born at 48 Frederick Street in Port of Spain, in a two-story house that overlooked the iconic Woodford Square. That house also functioned as a jewellery shop, which was described as “the largest and most famous jewellery shop in Port of Spain”. The description was made in Khan’s first major work, The Jumbie Bird (1961), a semi-autobiographical novel.

Khan himself came from a historic family. He was born of a Muslim family of Indian Pathan descent. His dada [paternal grandfather], Kale Khan, had escaped by the Kanpur Railway train from colonial India to Guiana/Guyana after fighting as a sepoy [soldier] against the British in the Indian Rebellion/Mutiny of 1857.

His dada later moved to Princes Town in Trinidad and again fought against the British in the notable Muharram/Hosay Indian massacre in San Fernando in 1884. Kale Khan then moved to Port of Spain, where he established his jewellery business.

Living in the capital city, the family witnessed and helped many destitute ex-indentured individuals and families converging to Port of Spain to await a ship to take them back home to India.

In The Jumbie Bird, Khan describes the desperation of these “coolies” living like vagrants in the streets and under tents.

V.S. Naipaul’s House for Mr. Biswas
V.S. Naipaul’s House for Mr. Biswas was featured in the documentary. It was the home of writer, Seepersad Naipaul, and his wife, Droapatie, and their sons, Vidia Naipaul and Shiva Naipaul. Born in Chaguanas in the Lion/Hanuman House, Vidia is the holder of the 2001 Nobel Prize for Literature, the only Trinidadian to have achieved this honour.

The house still stands intact today, at 26 Nepaul Street in St. James, and is described in V.S.’s classic novel, A House for Mr Biswas (1963): “It was like a huge and squat sentry-box: tall, square, two-storeyed, with a pyramidal roof of corrugated iron.” The novel has been ranked at number 72 in a list of 100 best English-language novels of the 20th century by the Modern Library Review.

V.S. Naipaul lived in the house for four years, from 1946 to 1950, before migrating to England on a government scholarship to study at the University of Oxford.

His family resided in the house until it was sold to the government in 1996, on the advice of Professor Kenneth Ramchand, who led the NGO, Friends of Mr. Biswas. Ramchand was interviewed in the film by Manwarren.

Other members of the NGO included Ashvin Rai Akal, son of Naipaul’s sister, Savitri Akal; Rajendra Ramlogan, a lawyer; Dr Radica Mahase, a historian; and Lenore Dorset, former protocol officer in the Office of the President.

The house was restored to its original form, with some of the memorabilia either restored, reconstructed or sourced from family members. The historical house in St. James was eventually opened to the public as a literary museum, 18 years later, in 2014. Artefacts, such as the yellow typewriter, the hat rack, the bookcase and the dining table, are all on display.

Dr Mahabir is a Trinidad and Tobago-based anthropologist, who has published 12 books on Indo-Caribbean identity.