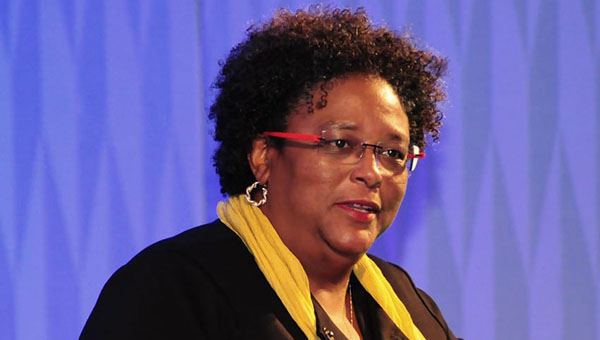 BRIDGETOWN, Barbados, May 27, 2020 (CMC) – The 15-member Caribbean Community (CARICOM) assembly, on Monday, iterated a call for closer collaboration with Africa, in fashioning a new global order, as the region participated in “Africa Day”, which it said underlines the strengthening of relations between the continents.

CARICOM Chair and Barbados Prime Minister, Mia Mottley, in a congratulatory message, said the new dynamic is contributing to the creation of a space for engagement and exchange of views, on a common destiny and shared future.

“So, my friends, let us have a voice in the international arena, collectively, as the world tries to find solutions to this crisis, in a manner that does not leave those of us in Africa, or those of us in the Caribbean, behind,” the CARICOM Chair urged.

Mottley explained it was also important to recognise that, 75 years after the establishment of the United Nations and the Bretton Woods institutions – the International Monetary Fund and the World Bank – “to come together, to determine how best we can re-fashion how they function and how they look, to ensure that we are not left out of the critical corridors of decision making”.

She declared it was vital “so that our peoples have an opportunity to bring that moral leadership”, noting that, at the time the UN was created, “many of our states, simply did not exist, as independent countries.

‘Therefore, the contemplation — as to how and what the United Nations should do, or the Bretton Woods institutions should do, in fashioning their world — did not take into account our existence and, indeed, our desires for a future that’s reflective of an inclusive partnership with our people.”

Mottley opined that as African Day is being celebrated this year, it should be viewed as a “milestone on the road, yea to a CARICOM-Africa cooperation, but not just simply for ourselves, but for the world.

“Lets us show that the people of African descent can make a meaningful contribution to this world and, that indeed, our experiences, over the last few centuries, prior to our becoming independent, stand as a platform, to give us the impetus to be able to show the world that there can be a better way, a more caring way, a more inclusive way, and one that does not reflect the manner, in which our countries were taken advantage of, and, worst of all, our people exploited.”

She said both Africa and the Caribbean have a “solemn duty to do right by our people. Let us, across CARICOM, across Africa, rise to the occasion and make life better for our people. But we can only do so, through collaboration and cooperation, rooted in common values.” 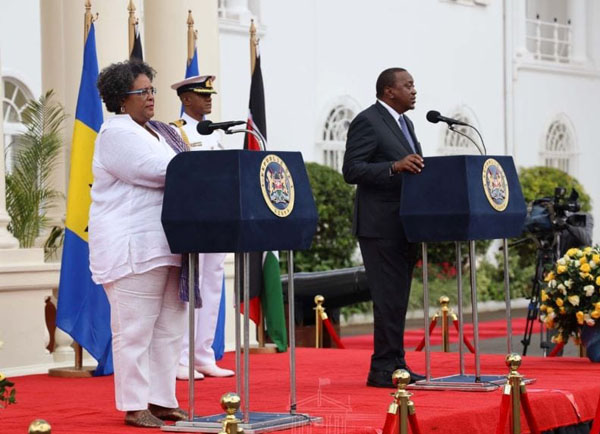 Chair of CARICOM and Barbados Prime Minister, Mia Amor Mottley, said, that although the coronavirus pandemic had caused the postponement of the inaugural CARICOM/African Union Summit in Nairobi, next month, she was still committed to deepening the region’s relationship with Africa. Here, she is pictured with Kenyan President, Uhuru Kenyatta, in December last year. Photo credit: GP.

Mottley posited that the International Decade for people of African descent, being led under the theme “People of African Descent, Recognition, Justice and Development”, must allow for an open discussion of the regions’ contribution to a modern world.

“The current discord, regarding race relations, the injustices of racism, racial discrimination, xenophobia and related intolerance, emphasise the indisputable gaps that still exist in the promotion and protection of human rights and fundamental freedoms for all.

“Indeed, we view the Decade, not just as an opportunity to reflect on these injustices of the past, but a platform to advance the Caribbean’s call for reparatory justice, to compensate for centuries of social and economic exclusion of people of African descent, which, my friends, regrettably, persists until today,” the Barbados Prime Minister emphasised.

Mottley said that it also presents a unique opportunity to take steps, towards changing the narrative to recognition and appreciation of the significant contribution of African descendants to today’s global society.

“We all know that we have a weakened multilateral system, and the impulse of major individual countries to rush to look inwards, in recent times, in these unprecedented times, indeed and to conduct themselves capriciously in their behaviour towards weaker States, all of these give us cause for the Caribbean Community and Africa to reach out to each other and to work together.

“We know that our world faces many, many challenges and, in this recent crisis of the world health crisis in the form of the coronavirus, COVID-19, there has been a corrosive economic and social impact on all of our countries and our people.

“Indeed, it has brought out the best solidarity and, equally, the worst in us, selfish unilateralism,” Mottley argued, questioning “we have now to ask, if this is the kind of international relations that we would wish for our global community”.

“We, in the Caribbean, have argued that more than ever, there is a need for a global leadership initiative, not rooted only in the voices and powers of governments, but also with those, who have capacity to influence a people in how they behave, in how they react, how they interact with one another and what they say.

“Because, it is up to us, to root this global leadership initiative in the moral leadership that gives our individual citizens rights and opportunities that have been denied to them, over the course of the last few centuries,” she reasoned.

In her congratulatory message, Mottley outlined the various initiatives, being undertaken by both Africa and CARICOM, to develop closer relations, and expressed disappointment that the scheduled summit of the CARICOM-African Union, for next month, had to be postponed, because of the effects of the COVID-19 pandemic.

“We look forward to that historic event taking place, at the earliest possible opportunity, for neither COVID nor history shall separate us from the united front that we can take, for the benefit of our peoples,” she said.