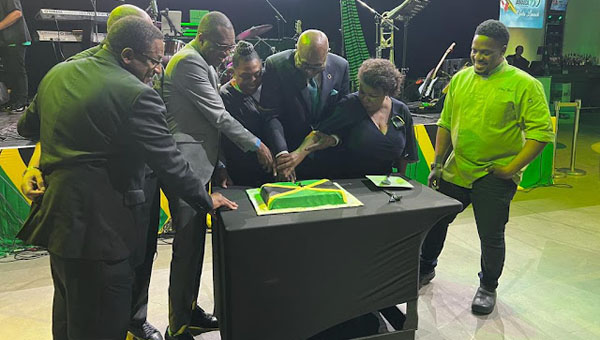 TORONTO, Ontario (Monday, May 9, 2022) — Like they did on the golden anniversary of Jamaica’s independence in 2012, Jamaicans in Canada will be celebrating the country’s diamond milestone with events, scheduled across Canada, throughout the year.

Under the theme, “Re-igniting a Nation for Greatness”, Jamaica 60 Canada was launched at a cocktail reception, on March 26, at the Toronto Event Centre on the grounds of Exhibition Place in Toronto.

Olivia Grange, Jamaica’s Minister of Culture, Gender, Entertainment and Sport, said at the event, that the country’s independence is part of a long journey, filled with stories, but through it all, the country has astonished the world with a culture and brand that is not paralleled by any nation its size, since the civilization of Greece.

“This is the fire we are determined to re-ignite in Jamaica 60. This, as I would say, is the natural mystic that Jamaica is. Re-igniting a nation for greatness means, that we see us all as one family in the globally-unifying theme of one love, and that one love is what Bob Marley and Jamaica gave to the world.

Grange described the launch of the Jamaica 60 Canada celebration as a “fire burning”.

“Our legend, Usain Bolt, championed the expression ‘Jamaica to the world’. When Usain did that, we all know he was echoing what we all knew, that Jamaica always made world class citizens, because we have pledged in our motto to play our part in advancing the welfare of the whole human race,” the Culture Minister added.

She said the Jamaica 60 celebrations would be a mix of impactful legacy projects and entertaining and exciting commemorative events for the entire year.

Prime Minister Andrew Holness launched the Jamaica 60 projects on April 10, announcing major improvements to Jamaica’s sports and infrastructure, such as the national stadium and in sports and music museums. 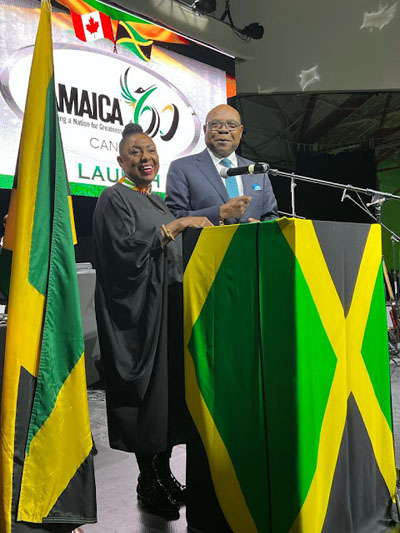 Edmund Bartlett, Minister of Tourism, also in attendance at the launch, said Jamaica is a country that people define differently however, he believes that Jamaica is not a country, but an idea.

“A wonderful idea that so many people, from all across the world, can contribute to and be a part of, and our founding fathers recognized the value of that idea and created the motto “out of many, one people”.

He said Jamaica is a confluence of ethnicities and cultures, noting that, over 60 years, the country has made a statement that the world is now responding to — Jamaica’s diversity can be simulated in one nation and one people.

In terms of recoveries and economies, Bartlett said Jamaica is the fastest recovery economy in the Caribbean today. The country has had four consecutive quarters of economic growth, never before experienced in many decades.

On the matter of tourism, he said Jamaica is leading the world in the process of managing recovery, and that the establishment of the Global Tourism Resilience and Crisis Management Centre was a signature statement of institutional capacity that Jamaica has developed to lead the world in recovering from global disruptions.

The centre is based at the University of the West Indies, Mona campus, in Jamaica. On March 25, Bartlett signed a Memorandum of Understanding with George Brown College in Toronto to set up a Satellite Resilience Centre.

The college will become the first Canadian partner of the centre, focusing on research and development, policy advocacy and communication management, program/project design and management, and training and capacity-building in various areas.

The minister encouraged those in attendance at the Jamaica 60 Canada launch, to not only celebrate Jamaica’s 60thanniversary of independence, but also the country’s intellectual capacity.

“This is our moment as we move forward after this 60, for us to redefine ourselves as a people that add value to the global experience. Let’s, in reflecting on our 60, develop a resolve for the next 60, to be true leaders of thought in the world.”

In her greetings, on behalf of Jamaican organizations and the Diaspora across Canada (in British Columbia, Alberta, Manitoba, Quebec, Nova Scotia and Ontario), Adaoma Patterson, President of the Jamaican Canadian Association, said 60 years ago, Jamaicans gathered at the King Edward hotel in Toronto, to celebrate Jamaica’s Independence from Britain.

“In preparation for that event, they had to learn the words to the new anthem, ‘Jamaica Land We Love’. They were so very proud to celebrate this momentous occasion and see the black, green and gold flag raised.”

Turning to the present and reflecting on the theme of this year’s independence celebration, Patterson said, “Given our moment in history, with ongoing discussions about Jamaica becoming a republic and reparations, this is a fitting theme.”

She noted that, over the coming months, leading up to August 6, Jamaican-Canadians will host many events, including health and wellness seminars, cultural shows, food festivals, flag raising ceremonies, church services and galas.

“We will proudly celebrate the tremendous impact of Jamaicans at home, in Canada and abroad. We will also reflect on where we, as a nation and people, are — including the economic and social challenges.”

The Jamaica Foundation Hamilton flag raising ceremony at Hamilton City Hall in August will honour the late Louise Bennett Coverley, and showcase its first Ring Ding, a version of the popular children’s program that Miss Lou hosted on the Jamaica Broadcasting Corporation (JBC), from 1968 to 1980.

The Jamaican Canadian Association has organized a Jamaica 60th Independence Trip to Jamaica, from August 1 to 8, which includes a 7-night all-inclusive stay at Ocean Coral Spring Resort.

Minister Bartlett also announced the “60/60” program — 60 couples from Toronto can stay in Jamaica, between August and December this year, for $60 per person per night in one of the resorts. Interested persons can check the Jamaica Tourist Board Canada for details.

The Jamaica 60 Canada launch reception included an address (on video) by Kamina Johnson Smith, Mminister of Foreign Affairs and Foreign Trade; greetings from Councillor Michael Thompson, deputy mayor, City of Toronto; and Dr. Rosemarie Moodie, senator of Canada, with introductions of the ministers by Sharon Miller, high commissioner for Jamaica to Canada, and Angella Bennett, regional director, Jamaica Tourist Board, Canada. The entertainment was provided by the Heritage Singers, Letna Allen-Rowe (spoken word), Dave McLaughlin (saxophonist), and the Arsenal Band.

The evening was moderated by cultural curator and media specialist, Danae Peart, and hors d’oeuvres were provided by Chef Selwyn Richards of The Art of Catering, and the Jamaican rum cake was created by Chef Noel Cunningham.

Calendar of Events in Canada for Jamaica 60 Celebrations