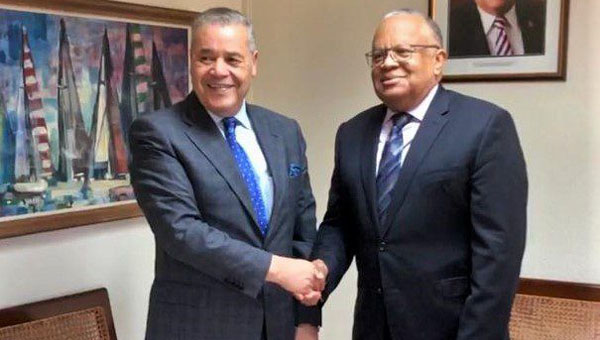 Senator Walcott expressed this yesterday, during a courtesy call with the new non-resident Ambassador of the People’s Democratic Republic of Algeria to Barbados, Abdelkader Hadjazi, at the Ministry’s Culloden Road office.

He noted that Barbados and Algeria have had diplomatic ties for over 40 years, and most of their interaction has occurred in the multilateral fora, including the African Union, International Labour Organization, United Nations, and the United Nations Conference on Trade and Development.

Ambassador Hadjazi, who resides in Caracas, Venezuela, complimented Barbados for its clean environment, organisation, and security, and agreed to strengthen ties.

He noted that Algeria is the largest nation, by area, in Africa and the Arab world, and there is an innovative agricultural initiative in the desert, which makes up most of that country.

Possible areas of cooperation between the two countries include a double taxation agreement, an air services agreement, a bilateral investment treaty, and a visa abolition agreement.