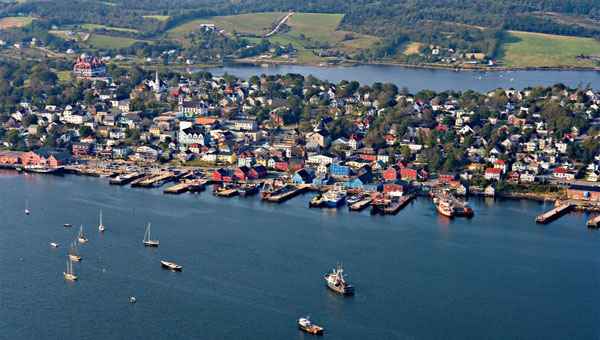 It has been said that heroes are ordinary people, who are revealed in the midst of extraordinary circumstances. If this statement holds true, then the actions of Black Sylvia of Lunenburg will do.

Lunenburg is a port town on the South Shore of Nova Scotia, Canada, founded in 1753, and was one of the first British attempts to settle Protestants in Nova Scotia.

Sylvia was one of the African slaves, who worked around the home and cared for the six children of Colonel John Creighton, one of the founding fathers of Lunenberg, Nova Scotia.

He led the settlement through the turbulent times of Father Le Loutre’s War, the French and Indian War and the American Revolution, and represented Lunenburg County in the Nova Scotia House of Assembly, from 1770 to 1775.

At sunrise on July 1, 1782, 170 American privateers invaded Lunenburg. They seized the town’s blockhouse, plundered the chief homes and shops, but limited their destruction to the burning of the homes of two officers of the local militia.

As the privateers advanced on Lunenburg, the colonel ran from his home to the nearby blockhouse, hoping to halt the advance. Silvia could have remained in the safety of her master’s house, with Mrs. Creighton and the children. Instead, she filled her apron with gun cartridges and musket balls, and ran up the hill to the blockhouse to help her master. Once in the blockhouse, Silvia helped to load the muskets for her master and his fellow militia men.

The enemy overwhelmed the blockhouse, and unaware of how helpful she had been in the defence of Lunenburg, the privateers allowed her to escape. Silvia returned to the Creightons’ home. The privateers fired upon it and would have wounded or killed the colonel’s youngest son, Joseph, had Silvia not thrown herself over him.

Silvia’s bravery during the Sack of Lunenburg would have been completely lost to posterity had it not been for for D. Luthor Roth’s 1890 history, Acadia and Acadians. It was Roth who preserved the rebel quotes that so unkindly referred to Silvia as an “old thing” and an “old hag.”

In 1895, Silvia’s story was also recorded in Mather B. Des Brisay’s 1895 History of Lunenburg.Archibald MacMechan’s 1923 Saga of the Seaswas based on eyewitness accounts and local correspondence, but it is clear that he, like most other retellings of the Black heroine’s story, referred back to the books written in the 1890s.

Writing in the late 20th century, the historian, Sylvia Hamilton, wondered what prompted Lunenburg’s enslaved heroine to risk her life for her masters. She also underscored the lack of recognition Sylvia received: “It was not Sylvia who was recognized for her efforts, but her master and a militia private to whom the provincial House of Assembly voted payments of money from the country’s land taxes.”

Despite the fact that Silvia failed to gain recognition during her lifetime , she began however, almost 200 years later, to capture the imagination of writers. In 1981, Jan Andrews had her story of Silvia included in The Dancing Sun: A Celebration of Canadian Children. Through the magic of historical fiction, Silvia becomes “a young Black slave”, who is described as saving her master’s son from Yankee privateers.

Five years later, Nova Scotian author, Joyce Barkhouse, wrote a short story about Silvia, titling it “The Heroine of Lunenburg”. Using artistic license, Barkhouse made the Black slave a sixteen-year-old girl, named the Creighton’s youngest son Timothy, had Creighton grant Sylvia her freedom, and ended the story with her marriage to a Black Loyalist.

We can only dream or wish that this was how things turned out for Silvia, but the historical records are absolutely silent. We know nothing more of this clever middle-aged woman after the events of July 1, 1782.

Neveverthless, what we do know, although not publicized, is certainly worth celebrating and getting into our history books. When American privateers attacked Lunenberg, a seaport town in Nova Scotia, an enslaved Black woman rose to the occasion and risked her life for those she served, a White master.

Her quick wits and bravery make Silvia a feisty heroine, whom all Canadians should admire and be proud of.