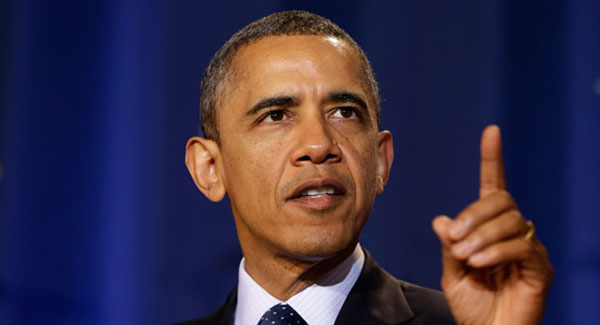 With President Barack Obama facing increasingly certain defeat in his quest for Congressional authorization to carry out military strikes against Syria, the Russian government, on Monday, appeared to offer the White House a way out of the crisis.

Seizing on what seemed to be an offhand remark by Secretary of State John Kerry during a London press conference, Russian Foreign Minister Sergey Lavrov pledged that Moscow would support any effort to put Syria’s chemical weapons under international control and eventually destroy them.

Lavrov was meeting in the Russian capital with Syrian Foreign Minister Walid Al-Muallem, who immediately “welcome(d)” the idea.

The proposal, which in the course of the day was also embraced by U.N. Secretary-General Ban Ki-moon and French Foreign Minister Laurent Fabius, appeared initially to provoke as much skepticism among administration officials here as it did when Kerry first raised the idea in response to a question of what Damascus could do to avoid military action.

“Sure, he could turn over every single bit of his chemical weapons to the international community in the next week – turn it over, all of it, without delay and allow the full and total accounting,” Kerry replied. “But he isn’t about to do it, and it can’t be done.”

After Lavrov’s endorsement, State Department spokesperson Marie Harf asserted that Kerry “was not making a proposal” but was instead offering a “rhetorical statement about a scenario that we think is highly unlikely.” She said Washington was prepared to take a “hard look” at the idea which, said, should be met with “serious, deep skepticism”.

But, by mid-afternoon, that skepticism appeared to turn more to hope as former secretary of state Hillary Clinton, emerging from a White House meeting with Obama himself, called the plan an “important step” in defusing the crisis.

In an interview aired on the Public Broadcasting System’s Newshour Monday evening, Obama also suggested Washington would take it seriously.

“(M)y intention throughout this process has been to ensure that the blatant use of chemical weapons that we saw doesn’t happen again,” he said. “If in fact there’s a way to accomplish that diplomatically, that is overwhelmingly my preference. And you know, I have instructed John Kerry to talk directly to the Russians and run this to ground.

“And if we can exhaust these diplomatic efforts and come up with a formula that gives the international community a verifiable, enforceable mechanism to deal with these chemical weapons in Syria, then I’m all for it.”

The day’s surprising turn of events came amidst growing indications that, absent some unanticipated move, Obama faced a major political defeat in Congress over his requested authorization despite the support of the most of the Congressional leadership of both parties and an all-out lobbying effort by his administration, the powerful American Israel Public Affairs Committee (AIPAC), and prominent neo-conservatives and former senior officials of the George W. Bush administration.

As of Monday, Obama took personal leadership of the effort, taping interviews on virtually all of the major television network and cable news programs, in addition to PBS, and preparing a major policy address to the nation Tuesday evening.

According to a number of published reports earlier Monday, a vote in the Democratic-led Senate, which could come as early as Thursday, was expected to be extremely close despite the apparent support of a majority of the Democratic caucus there.

But in the Republican-led House, the authorization faced almost certain defeat with even a majority of Democrats considered likely to vote “no”, while opposition to the measure among Republicans, despite their leadership’s support, was believed to be much greater.

“If I were the president, I would withdraw my request for the authorization at this particular point,” said Democratic Rep. Jim McGovern, a liberal Democrat who has generally – if somewhat reluctantly – supported Obama on foreign-policy issues, said on CNN’s “State of the Union” public affairs program Sunday.

Congressional opposition is strongly bolstered by the latest polling that shows that, if anything, Obama’s case for attacking Syria has lost ground significantly among voters across the country over the past week.

According to a Pew Research Center/USA Today survey conducted Sep. 4-8 and released Monday, 63 percent of respondents said they oppose a strike – 15 percent more than a week ago. Of that 63 percent, 45 percent said they are “strongly oppose(d)” to military action.

Despite the enlistment last week of former senior Bush officials in the administration’s lobbying effort, the erosion of support among grassroots Republicans has been especially severe. Four in 10 self-identified Republicans said they opposed strikes in the earlier poll; as of Sunday, seven in 10 Republicans voiced opposition.

Opposition has also grown among the independents, according to survey, with two-thirds now opposed, up from half the weekend before.

A less detailed CNN/ORC poll conducted over the past weekend gained a somewhat more-favourable result for the administration, with 59 percent of respondents voicing opposition and 39 percent in favour. Only 28 percent of Pew respondents said they favoured airstrikes against Syria.

If domestic support for strikes appeared to plunge, Obama was not doing much better on the international front.

He was embarrassed last week when only half of the leaders of the Group of 20 (G20) – five of which (the U.S., Britain, France, Saudi Arabia, and Turkey) have been aiding Syrian rebels for some time – meeting in St. Petersburg, Russia signed on to a statement expressing support for “efforts undertaken by the United States and other countries to reinforce the prohibition on the use of chemical weapons” although it not explicitly endorse military action.

On Monday, the White House announced that 14 other countries had signed on – far less than the “several dozen” that, according to unnamed administration officials and Congressional supporters, allegedly support U.S. military action. Of the 14, the only G20 member was Germany; the others included mainly Central European nations, the three Baltic states, Denmark, Qatar, the United Arab Emirates, Morocco, and Honduras.

In this context, the possibility that the U.S. and Russia, Assad’s most important international supporter, could agree on a plan that would satisfy U.S. demands to eliminate any possibility that the regime could use chemical weapons would appear to be particularly attractive to Obama.

Early indications suggest that the administration will, as Clinton argued, use the proposal’s timing to persuade reluctant lawmakers to pass the authorization in order to maintain pressure on Moscow and Damascus to follow through.

“It could be used either way; it could take the steam out of the administration’s lobbying effort or give it a new argument for making military action appear more credible if they don’t co-operate,” one lobbyist opposed to military strikes told IPS.

The idea that Syria would give up its chemical weapons arsenal to avoid an attack was circulated quietly on Capitol Hill by Democratic Sen. Joe Manchin last week in the form of an alternative resolution which demanded that Damascus sign and comply with the Chemical Weapons Convention (CWC) within 45 days or face an attack.

Some lawmakers reportedly objected to the idea because it would implicitly put pressure on Israel, which signed the treaty in 1993 but never ratified it, making it, along with Syria, the two Koreas, Egypt, Angola, and Myanmar, one of seven non-member states worldwide.