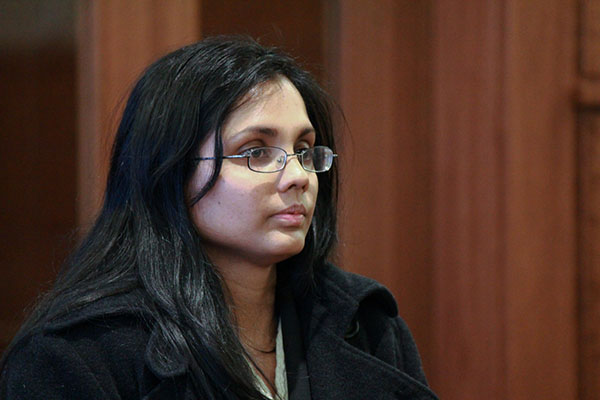 MASSACHUSETTS, United States CMC – The Trinidad-born former state chemist for Massachusetts, Annie Dookhan, faces up to five years in jail after she was found guilty of falsifying thousands of tests used to prosecute drug-related crimes.

The court was told that Dookhan, a single mother in her 30s, covered up her shortcuts.

She had initially denied the charges, but later pleaded guilty to to 27 charges of obstruction of justice, perjury, and tampering with evidence.

The Boston-area Department of Public Health laboratory, where she had worked for 10 years, was closed in August 2012 after the scandal surfaced.

Judge Carol S. Ball, who delivered Dookhan’s sentence in Suffolk County Superior Court in Boston, said in her ruling that “the consequences of her behaviour, which she ought to have foreseen, have been nothing short of catastrophic.

“Innocent persons were incarcerated, guilty persons have been released to further endanger the public, millions and millions of public dollars are being expended to deal with the chaos Ms. Dookhan created, and the integrity of the criminal justice system has been shaken to the core.”

The state had spent a total of US$8.5 million responding to the drug lab crisis and another US$8.6 million was authorized to be spent in the current fiscal year, according to Alex Zaroulis, spokeswoman for the state Executive Office for Administration and Finance.

Media reports said Dookhan’s actions may have distorted the results of the criminal trials of more than 40,000 individuals, and close to 350 people have already been released from prison as a result.

Dookhan, who claimed she had a Masters Degree in Chemistry, was removed from her laboratory duties after she was caught forging a colleague’s initials in June 2011, but she continued to serve as an expert court witness until she was put on administrative leave in February 2012.

In August 2012, she admitted to having mishandled samples, and a subsequent investigation alleged that she had routinely tampered with criminal evidence by altering vials of substances awaiting evaluation for drug content.

Media reports said she altered them, allegedly, to cover up the practice of “dry labbing” samples, which means testing only a fraction of a group of samples before marking them all positive for illegal drugs.