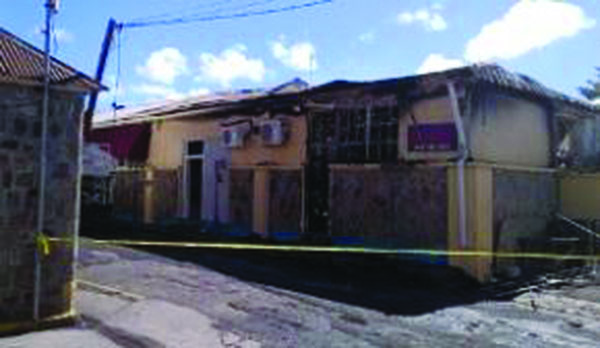 CHARLESTOWN, Nevis CMC – Premier Vance Amory has described as a “black day” for Nevisians, the fire that destroyed most of the building housing the Treasury Office, the VAT Office and the Philatelic Bureau.

The main opposition Nevis Reformation Party (NRP) has asked nationals to “restrain themselves from the temptation of jumping to conclusions, finger pointing and the spreading of rumors” regarding the early morning blaze on Friday.

The fire is the third mysterious blaze in the twin island federation in recent weeks, following upon those that destroyed the Venezuelan Embassy and partially destroyed the offices of the Organization of American States (OAS) in St. Kitts.

“All of us…must feel that this is a black day to have this kind of event happen,” Premier Amory told a local radio station, as he too appealed for calm and patience.

“It has caused very serious devastation and is going to affect not only the Nevis Island Administration but the whole Nevis island populace who do business with the Treasury…persons who do businesses overseas…a whole range of persons will be affected by this.”

He confirmed reports that some of the Treasury records had been backed up, but nonetheless expects it would be a couple of days before the departments could begin to operate.

The NRP said that residents should remain calm and exercise patience and praised the work of the firefighters.

“We further ask Nevisians to restrain themselves from the temptation of jumping to conclusions, finger pointing and the spreading of rumors.

Leader of the main opposition grouping in St. Kitts-Nevis, Team Unity, Dr. Timothy Harris, said he was confident that the authorities would work diligently in rebuilding the structure.

“We want the leadership and the people of Nevis to know, that we stand with them during this most difficult time. We know that a fire can certainly burn down a building but it can never burn down the hopes and dreams of a people.

“Yes these are very critical public institutions that have been ravaged by a fire of unknown origin, at this particular moment in time, but I am certain that the resolve and resilience of the people of Nevis remain strong. Nevisians are a renowned people of faith and we know that faith is the substance of things hoped for and the evidence of things unseen.”

Meanwhile, former leader of the People’s Action Movement (PAM), Lindsay Grant is questioning the thoroughness of investigation into the fire that gutted his property earlier this month.

He said he was only contacted by the investigators a week after the fire.

“I found that very disconcerting and alarming that almost seven days had passed and the first time that they [talked] to me was when they were concluding their report,” Grant told the WINN FM radio station here.

Police and Fire and Rescue Services have indicated that the blaze may have been caused by a power line outside the building, but Grant and eyewitnesses dispute the findings.

“If the report conclusively says that the fire started as a result of electricity and from the pole, it therefore means that SKELEC (St. Kitts Nevis Electricity Company) bears some responsibility for the loss of the building, so I will be looking at that very carefully,” Grant said.