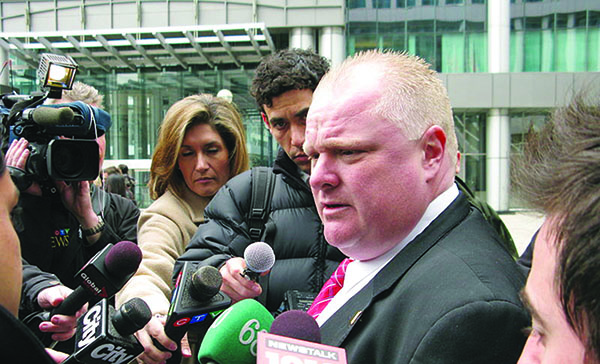 TORONTO, Ontario – A YouTube video of Toronto’s mayor, Rob Ford, using Jamaican expletives in a conversation in a restaurant on January 20 has Jamaican Canadians weighing in with mixed reactions.

The video, which became public on the morning of January 21, shows the mayor at Steak Queen restaurant, speaking to someone or several people, not seen on camera, about police surveillance of him and shows him criticizing Police Chief Bill Blair.

The mayor’s speech is laced with Jamaican swear words, “bumbaclaat” and “rasclat,” which had many in the media seeking translations from Jamaicans in their news reports.

Ford has since admitted to the media that he was drinking that night, something he promised he would stop doing a few weeks ago after confessing to using crack in a drunken stupor.

Clive Forrester, who teaches Jamaican Creole in the department of languages, literature and linguistics at York University, says context is very important wherever interaction or communication is concerned all the time.

Forrester said the setting for the video with Mayor Ford was a fast food restaurant that might have been after closing hours because it seemed kind of empty.

He said the purpose for interaction seemed to have been simply relaying some information amongst acquaintances and the participants were Rob Ford and persons that he calls his friends.

“The interaction in the discussion doesn’t seem to be angry, hostile or combative. If that is the case, then even though Rob Ford might have used a curse word, he might not necessarily have been cursing. So, once you contextualize the interaction and kind of situate just that one particular word in the larger context of the utterance, it would be very difficult to say that he was cursing based just on that clip,” he said.

Forrester said whether or not it was appropriate is a matter of taste.

The professor said that as a publicly elected official he is sure that persons expect a particular level of decorum whenever public officials speak in public, interact with their constituent, or whatever.

Forrester said he does not know if Ford was in earshot of persons who were not his friends, or who were not a part of the discussion.

“So, the video seems to have been kind of surreptitiously captured so he didn’t know he was on camera. He was just saying whatever he wanted to say and it got caught on camera,” he said.

Stepping away from the linguistic aspect of the matter, Forrester described this as being careless on the part of the mayor.

“In terms of whether or not it was appropriate or devastating, that’s a matter of taste. There’s just not enough context to make such a call,” he said.

He said that in a diverse, plural and multicultural society like the Greater Toronto Area where language and other artifacts of cultural identity from different ethnicities are shared and borrowed, he is not sure if there is “any kind of rigid social code which says that you can’t borrow a word or two from a different culture when you’re interacting in a private setting.”

He said conversations about race, political correctness, and social appropriateness are matters that people are trying to squeeze into this very short video clip.

Forrester has raised the issue of the mayor’s use of Jamaican patois in his class and he said the comments from the students were mixed.

Some students used their earlier opinion of the mayor to determine how they should evaluate the video.

There were those who were completely against Ford using any form of Jamaican in any context. Others argued that it appears the mayor cannot catch a break, that it seemed he cannot not have a private conversation.

Forrester said it is important for people to realize that curse words, the Rasta tam or the ganja spliff do not typify all Jamaicans.

“It is not the sole marker of Jamaican identity and not all Jamaicans identify with this particular thing,” Forrester said, noting that as a result of this issue, for the first time he heard the word “Jamaican Creole” on CNN in a report by Don Lemon.

The discussion in the classroom mirrors what is being said on the streets and in homes.

“I think Mr. Ford got all the use of the words in the right context and his accent appears to be quite on the mark. However it has left the impression that this is the full total of Jamaican language – only expletives – and, of course, it is not,” said Sandra Whiting, a storyteller and event organizer.

She noted that this kind of language is not used by people of sensitivity.

“It’s gutter language and used by people who are in the gutter,” she said, acknowledging that she does not have a problem with people using Jamaican accent or Jamaican language because it’s a thing that people like to do but in this case he is certainly not portraying Jamaican in a very good sense but she does not think that was his rationale.

“He is rude and out of order and I think he is using that to link Jamaica to the nastiness that he’s carrying on with because the press have him to be involved with druggies and everybody know that Jamaicans who openly use those languages are Jamaicans who are in the wrong,” she said.

She said this may link the mayor in some people’s minds with “him clowning round with Jamaican bad men dem and dat put a bad taste in the mouth of decent Jamaicans and decent people who want to go to Jamaica.”

Allen-Rowe said the mayor’s use of Jamaican expletives is an insult to her.

Andrea Davis, an associate professor of humanities at York University and co-editor of the book, Jamaica in the Canadian Experience, says the construction of Jamaican cultural identity in Canada’s largest and most diverse city, Toronto, oscillates between two extremes: a fear of excess (excess violence and excess masculinity that have to be rigidly controlled) and a kind of “cool” Black urbanity.

She said the latter is a posture both of celebration and resistance taken on especially by non-white youth, regardless of country of origin.

“It’s a statement about what it means to be both inside and outside a nation, always (even in celebration) aware of one’s precariousness. Depending on the social context, the pendulum can swing in any given direction at any given moment,” she said.

Davis notes that, “by choosing to use Jamaican swear words and by playing on the trope of the aggressive, potentially violent Jamaican male, Mayor Rob Ford betrays a subtle cultural racism that, in this instance, was deployed against a ‘minority’ culture from a position of power.”

“While appearing to be merely adopting cool Black urbanity, Major Ford’s performance, in fact, reinforces dangerous stereotypes about Jamaicans and Black people in Toronto, identifying them as vulgar and volatile (at worst) and ridiculous (at best). His behaviour, in short, revealed a lack of sensitivity to a significant percentage of his electorate and a refusal to acknowledge the cultural politics at play in the city he represents,” she said.

Dr. Lisa Tomlinson, a cultural critic and language specialist and lecturer at the University of Ontario Institute of Technology, does not find the mayor’s use of Jamaican Creole offensive.

She writes in the Huffington Post that it is surprising that the media would treat Fords’ appropriation of the Jamaican language as a new phenomenon.

“Isn’t it very natural for politicians to adapt the language of the common folks in order to gain their popular support? Pastors are infamously known to take on this approach to increase their congregation and Ford like a sly politician has even slithered his way onto the black church scene in Toronto,” she writes.

She is skeptical of the media’s criticism of Ford’s appropriation of Jamaican, asking “Since when has the media or politicians in Toronto ever been a defender of Jamaicans, or the black community for that matter? Are these not the same institutions that have routinely used demeaning images to characterize our community and to assist in criminalizing black male bodies?”

Honor Ford-Smith, a professor at York University, playwright and author, in Maclean’s, says the mayor is trying to buy himself some roots credibility.

“That seems to be what he’s doing. But it kind of backfires, because it seems that the very people he’s trying to buy the credibility with are the ones who videoed him, and he ends up looking like a buffoon, and he ends up having his attempt to capture roots credentials backfire. This act is very much something that politicians do in order to convince their voters that they’re more working class and have more credibility than they actually do. And he consistently does this. It’s this populist trick in a way, because he’s not at all working class, he’s actually a very wealthy man,” she said in an interview with the magazine.

Tomlinson also mentioned in her column that Ford is from a multi-millionaire political family.

Commenting on the use of the Jamaican swear words, Ford-Smith said they are words which, when used, are very offensive.

She noted that Jamaicans have a broader vocabulary. “So I don’t know why his impersonation of that is something that requires that repetitiousness. The translation of it is not what is critical—the important point is that he’s spreading a lot of cloth, that would be the envy of any textile merchant’s cash register. And he’s doing this for a particular purpose. It’s a representational power that he’s gaining,” she said.

Although unrelated to the Rob Ford saga, in February the Jamaican Canadian Association will be using a Jamaican word, “Boonoonoonoos” translated as “pleasant and nice” – a word which counters the swear words – to celebrate the achievements of several Jamaicans in Ontario.

The event will also be a tribute to South Africa’s former president and anti-apartheid icon, Nelson Mandela.