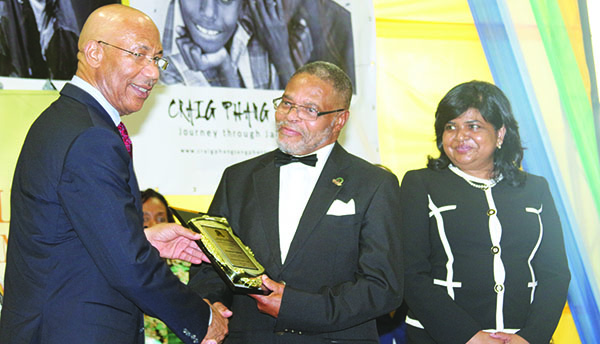 Photo above: His Excellency the GG ,the Most Honorable Sir Patrick Allen, left, presents the Governor General’s Award of Excellence for Service in the Diaspora to Kingsley Percival Gilliam, with Jamaica’s High Commissioner to Canada, Her Excellency Janice Miller, at right.

The prestigious award was presented at the Governor General Award Luncheon and Ceremony,  held at the Montego Bay Convention Center, on Tuesday June 16, during the recently held 6th Biennial Jamaica Diaspora Conference, which ran from June 13 to 18.

“I am greatly honored not only to have been a recipient of this prestigious award but also to have been asked to address you on behalf of my fellow recipients,” said Gilliam in his acceptance speech.

An example of community service, Gilliam believes that the quest for excellence requires sacrifices to go “above and beyond” in using one’s abilities to achieve the goals of community development and nation building.

A Jamaican by birth and a nationalised Canadian, his precepts are reflected in numerous scholarly writings, and areas of expertise, including community organisation and development; human resources management; human rights advocacy; and social justice policy development.

In his drive to cement the goals of community development, he served for more than four decades in mental-health care, social services, and community activism in Jamaica and Canada.  He is currently Director and Spokesperson on policy issues for The Black Action Defence Committee (BADC), which advocates against police brutality and abuse.

In Jamaica, Gilliam served The Bellevue Psychiatric Hospital in Kingston, after graduation from the Bellevue Hospital School of Psychiatric School of Nursing.  On migration, his professional career included service in the Ontario Human Rights Commission, the Ontario Ministry of Social Services, The Human Rights Board and Ontario Ministry of Transportation, where he served as Senior Policy Advisor.

He was also a Consultant with Dudley, Morgan and Associates, a South African Human Resource Development firm, with a branch office in Canada.

He also qualified in General Arts, Science and Early Childhood Education at the Canadian College of Applied Arts and Technology, Sudbury, Ontario.

His distinguished record of public service and community development spans more than 45 years.  He is currently Director, Social Services and Health of the 11 year old Jamaican Diaspora Canada Foundation, whose mandate includes, advancing the growth and development of Jamaicans in the Canadian Diaspora.

He is a founding member and three-term president of The West Indian Society of Sudbury, which developed social and educational programmes  to advance the settlement and social development of West Indians and other persons of African descent in the Sudbury Region.

Mr. Gilliam also served as the Vice–Chairman of The National Black Coalition of Canada (NBCC, 1974-1977), and was the Founder of the Edmonton, and Calgary Chapters in 1981, serving three terms as President in  Edmonton.

In his own words, Gilliam’s life and work demonstrate that “An individual can reach for the highest heights of achievement in his or her pursuits, and never surrender to the temptation to do less than he or she can do”.

“Jamaicans in the Diaspora stand on the shoulders of a long line of Jamaican pioneers and trailblazers who have distinguished themselves and have accomplished great things in foreign and often very hostile lands to serve humanity,” he said in his acceptance speech.

“We owe them a debt of gratitude for their courageous and relentless efforts to break down formidable barriers to create opportunities for those of us who followed.”