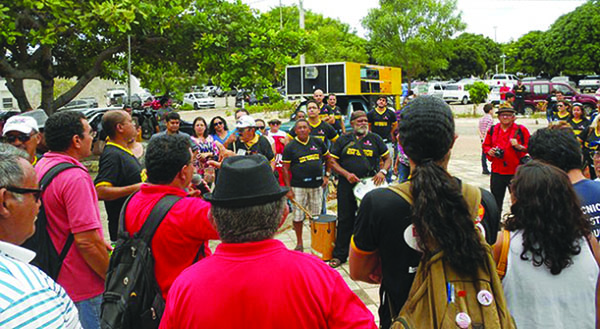 Protests Threaten To Paralyse Brazil Ahead Of World Cup

RIO DE JANEIRO, Brazil (IPS) – As the FIFA World Cup approaches, the streets of Brazil are heating up with strikes and demonstrations, and there are worries that the social unrest could escalate into a wave of protests similar to the ones that shook the country in June 2013.

Groups of public and private sector workers have been on strike for days, creating a hectic backdrop for the Jun. 12-Jul. 13 global football championship.

In the southern city of São Paulo a strike by bus drivers last week generated the worst traffic jams in the history of the city. And on May 21, some 8,000 police marched to the esplanade of ministries in the capital Brasilia, in a protest supported by the federal and military police forces.

In the 12 cities that will host the World Cup matches, at least 15 protests are scheduled for the event’s opening day.

Trade unions are taking advantage of the spotlight on Brazil to pressure the centre-left government of Dilma Rousseff to meet their demands.

Even workers in over a dozen Brazilian consulates in the United States and Europe, responsible for issuing visas to those interested in flying to Brazil for the sporting event, went on strike last week.

And staff at LATAM airlines – the region’s largest carrier, formed by the merger of Brazil’s Tam and Chile’s Lan – threatened a strike or slowdown that could bring airports to a halt and disrupt hundreds of international flights during the World Cup.

Professors at 90 percent of the country’s federal and state universities and teachers at state and municipal primary schools across the country have also gone on strike, while many public cultural foundations and museums have closed their doors.

“This isn’t all happening because of the World Cup,” he said. “We had been talking for a long time about going on strike. Our complaints aren’t connected to the championship – they are demands we have been voicing for years.”

If the situation remains unchanged, this country of 200 million people could grind to a halt during the World Cup, Ronaldo da Silva admitted, after pointing out that the authorities have not set a date for negotiations. He added that as the opening match approaches, relations could become even more tense.

“The federal government should have foreseen this scenario,” the trade unionist said. “They want to show the image of Brazil as a first world country, but our health system is almost broken down, and the same thing is true of education and public transport.”

“On May 30 we’re going to discuss the possibility of a general strike, in our confederation. The government has been hearing the message since last June’s protests,” Ronaldo da Silva said.

In late 2013, the government signed more than 140 labour agreements with a number of different trade unions, pledging – among other things – a 15.8 percent raise, to be paid in three annual quotas.

But at that time, the projected inflation rate was much lower than today’s rate of 26 percent, the unions complain. “Of the agreements that were signed, 70 percent are not being fulfilled,” said Ronaldo da Silva.

Another problem facing the public sector is the exodus of public employees. In the latest recruitment process, in 2011, 240,000 were hired – and nearly half have already left their jobs, according to CONDSEF.

Since February 2012, legislators have been discussing proposals for preventing strikes during the World Cup. Draft law 728/2011, currently under debate in the Senate, would limit strikes ahead of and during the global sporting event.

Under the bill, unions organising a strike would have to announce it 15 days ahead of time, and 70 percent of workers would have to remain on the job.

And in February the government introduced a bill to limit protests and strikes, but there are doubts that it will be approved in the next few days.

Justice Minister José Eduardo Cardozo said strikes, demonstrations or other measures should not create chaos and disorder or generate economic damage or violence.

“The police, who serve the constitution, know that strikes are prohibited by Supreme Court rulings,” he said. “We can use the national security forces and the armed forces to guarantee law and order,” he added, to reassure the public.

On May 13, Sports Minister Aldo Rebelo predicted that the World Cup would be a peaceful time of public celebration.

“If protests occur, they’ll be isolated incidents,” he said. “I believe the country is ready because Brazil’s legislation protects peaceful demonstrations and prevents violent protests. I don’t think there are many people interested in seeing the World Cup turn chaotic because of violent protests.”

“I think we’re prepared, that public security is going to work. The safety of visitors and guests is assured. There is no risk,” he maintained.

But Pedro Trengrouse, a member of the Brazilian Lawyers Institute who specialises in sports law, said there is a climate of frustration that is very different from the initial enthusiastic reception of the 2009 announcement that Brazil would host the World Cup.

“The government generated an exaggerated sense of expectation among the public, which has fallen flat. It promised a lot and has delivered very little. The outlook has changed and the protests are a reflection of those changes,” Trengrouse told IPS.

When Brazil was selected as the host of the 2014 World Cup, no one was thinking about protests, he pointed out, because 80 percent of the population at the time supported Brazil’s bid for hosting the event, according to opinion polls.

Today, however, 55 percent of respondents say the World Cup is likely to bring the country more problems than benefits.

In 2008 and 2009, Trengrouse worked as a United Nations consultant in the service of the Brazilian government for legislative affairs related to sports, especially the World Cup.

The lawyer said the government associated the World Cup with the major structural transformations that Brazil needed, but that they would have had to be carried out with or without the mega sports event.

“A balance must be struck,” Trengrouse said. “The workers’ right to strike for better conditions is inalienable. But strikes must not hurt the public. There is opportunism in some sectors. Protests cannot be allowed to give rise to criminal activities, vandalism and fascist rallies.”