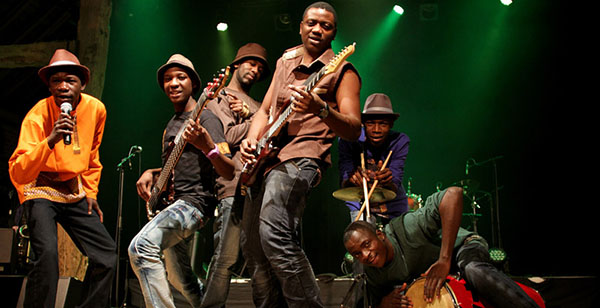 The Vibrant And Captivating Rhythms Of Zimbabwean Band Mokoomba

Torontonians who were present at the Lula Lounge last Tuesday, July 8, 2014, were part of history’s making as the Mokoomba Band performed for the first time in Toronto, Canada. The energy could not be contained, as rich Afro Fusion sounds of the Mokoomba Band filled Lula Lounge’s space, making it physically impossible for any one person to stand still. The dance floor did not go unoccupied for even a minute, as guests of diverse cultural backgrounds jived to the modern rhythms of the six member band.

Members of the Mokoomba band come from a minority group, known as the Tonga people in Victoria Falls, Zimbabwe—the regions’ languages are Tonga, Ndebele and Shona. Though Tonga, the main language of the Tonga people, is not understood by the population’s majority, the Mokoomba band has not ceased to make great impact since the formation of their group in 2001. Their impressive performances have transcended African soil, taking them to stages all over Europe, where they have performed in European festivals for the last three years.

The unique music of Mokoomba is brilliantly captivating regardless of the unknown Tonga language. There were no missing gaps, for guests eyes remained fixed on the band while their hips moved briskly to the rich and vibrant sounds of the band, as if everyone understood and was speaking the same language. Mokoomba’s energy, style and creative performance was what united a crowd eager to soak up a bit of Zimbabwean culture. With 300 plus guests, it was impressive to see the music of Mokoomba captivate the people in such a way that neither race, class, nor religion mattered.

Mokoomba will be touring the United States and Canada over the next few weeks. Their summer tour was kick-started on June 29 in Schenectady, New York.  They have since crossed borders, leading them to performances in some cities of Ontario, such as London, Kingston and Toronto.  Mokoomba will also perform in other Canadian provinces, including British Columbia and Quebec. They will leave Canadian soil briefly for more performances in our neighbouring country and return to Canada, ending their 2014 North American Summer Tour in August.

If you missed out on last week’s performance at Lula Lounge, visit Mokoomba’s website at www.mokoomba.com for future tour dates and further information.