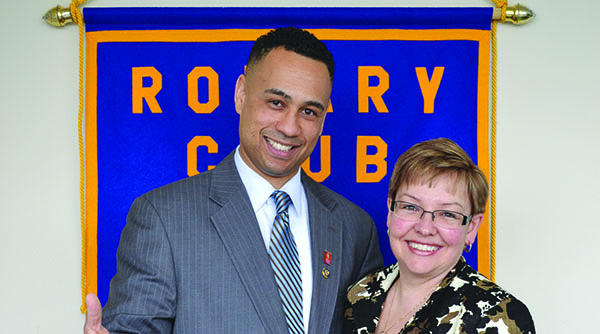 Photo above is of Leon Presner, President of the Pickering Rotary Club, with Joanne Theriault, Director of Vocational Services.

PICKERING, Ontario – The legacy of Rotary Club International is rich. Down through the years, its members have included people from all walks of life – from presidents to doctors, journalists to business leaders and even musicians.

In the city of Pickering, Ontario, the local club is admittedly small, yet mighty. That’s according to current president, Leon Presner.

Its might is partly demonstrated in its annual Ribfest, a summer event that boasts large numbers of visitors. Now it’s looking to add an annual Wingfest. Add to all that is the fact that president Leon was honored with a recognition award in October, 2014 for his efforts in increasing club membership. Not only has the increase been in numbers of people, it has also been in diversity of cultures and a concerted attempt to attract younger people to the club.

With that in mind, he was responsible for drafting the vision statement:

“The Rotary Club of Pickering will be the most dynamic, inclusive and diverse service club in the Greater Toronto Area. We will wholeheartedly embrace change, difference; and be sensitive to all of the needs of the residents of the City of Pickering and beyond. We will exemplify leadership and professionalism within the community and we will set an example for all to follow.”

Perhaps his own cultural heritage gives him a special appreciation for the richness of cultures. He was born in Liberia, the son of a Ghanaian mother and father of Jewish descent.

“I felt that (in diverse communities) it was important to have representatives from as many countries as possible so that everyone can have a say. This includes women and younger people,” he said.

In his normal everyday life, Leon is a police constable with Durham Region Police. He joined Rotary in 2010. Since then he has been “a real purveyor of diversity in Rotary in the GTA,” noting also that when he joined the Pickering Rotary, “It was less diverse than today.”

Rotary is a philanthropic organization, where like-minded professionals come together to solve what they see as “world problems.”

It was founded in 1905 by Paul P. Harris, a Chicago attorney. Within its mandate is the idea that unique solutions for problems can be found by applying leadership and expertise to social issues.

It’s said that the name ‘Rotary’ was in reference to the Chicago group’s early practice of rotating meetings among the offices of each member.

Clubs can decide to support a cause on the recommendation of just one individual member. In the Pickering club, that has happened more than once. For example, Leon cites a clean water project for Laos, South-East Asia, which was introduced by a member. A water filter costing $75 provides a family with fresh water.

According to Leon, the Pickering club donated $5,000 for this project in Oct. 2014. Helping projects in its own backyard is also important to Rotarians. The club also gave $5,000 to a children’s safety village in Whitby, ON, a short distance away.

Leon says that while anyone with an entrepreneurial mindset will feel comfortable in Rotary, some notable leaders have gone through the organization. There’s always opportunity for a variety of experiences, building additional skills and networking.

He very much wants to leave a legacy that goes on after his presidency ends. One of his goals is to double his club’s membership. And he wants to engage new Canadians so they’ll get involved early after arriving in Canada.

“I tell younger people that volunteerism is a good thing,” he says. “You can learn skills that your workplace would never offer.”

The club president says he’s open to working with individuals or groups that want to make a difference in their community or in the world.

Or they can contact Leon by sending an email to leon.presner@pickeringrotary.club.

Beverly Browne has been writing for Canadian publications and businesses for more than 20 years. In 2013 she published her first book entitled, How To Buy Tax Sale Properties: A Canadian Guide. The easy-to-read book teaches people how to acquire real estate from local governments through the tax sale process. She also gives workshops on the subject, for people who want to jump-start their efforts. Bev can be reached at admin@accessprofits101.com for more information on real estate through tax sales, or if you want to respond to this column.