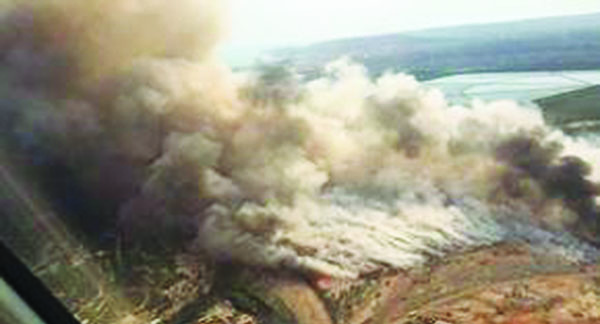 KINGSTON, Jamaica, CMC – Health authorities say that the tests on the quality of air taken during the height of the fire at the Riverton Disposal Site that blanketed the Corporate Area, as well as the central parishes of St. Catherine and Clarendon, contained high levels of hazardous substances including Benzene.

A statement from the Ministry of Health noted that the Air Quality Report shows that during March 13 and 14 there were high levels of hazardous substances including Benzene and that prolonged or long-term exposure to Benzene has been blamed for causing cancers such as leukemia.

But the Ministry of Health quoted the US Centres for Disease Control as indicating that long term exposure to Benzene is translated as exposure for over one year.

Acting Chief Medical Officer, Dr. Marion Bullock DuCasse, said the sampling for volatile organic compounds showed that Benzene was at the highest level ever recorded by the Ministry and that is directly attributed to the burning at the Riverton Disposal Site.

Benzene, which is also found at low levels in emissions such as cigarette smoke and from vehicles, can cause symptoms such as drowsiness, dizziness, rapid or irregular heartbeat, headache, tremors and confusion immediately after exposure to high levels of  the substance.

Long term exposure can result in a decrease in red blood cells leading to anaemia, excessive bleeding and a reduction in the capacity of the immune system to fight infections and cancers.

Dr. Bullock DuCasse said the other particulate matter found in the air during the testing can cause mild to severe effects on the respiratory tract, including lung irritation and respiratory distress.

She advised that children, the elderly and people with chronic respiratory conditions, such as asthma should be closely supervised.

“If persons experience any sort of respiratory symptoms, they should take their prescribed medication or seek medical attention immediately,” she said, with the Ministry of Health indicating that it would continue to monitor the situation in collaboration with the National Environment and Planning Agency.

The Office of Disaster Preparedness and Emergency Management (ODPEM) said that more than 90 percent of the area under fire at the site had been contained and extinguished, resulting in “significant reduction in the levels of smoke emission.

“We wish to advise that we are optimizing the resources available, in order to ensure that the fire is extinguished in the shortest possible time,” the ODPEM added.

Meanwhile, the Jamaica Environment Trust (JET) says it plans to take legal action against the National Solid Waste Management Authority (NSWMA) that has responsibility for the landfill.

Last week, JET urged the National Environment and Planning Agency (NEPA) to take enforcement action for alleged breaches to its environmental permit issued to the NSWMA. The permit includes a fire response plan and the procurement of equipment to control fires.

“We, like many other members of the public, have lost confidence in the willingness and commitment of the present leadership of the NSWMA and the Ministry of Local Government to effectively manage the process going forward.

“There is every indication that there are vested interests in the annual burning of the Riverton dump, and although it is known that the fires are often deliberately set, the public has not been informed of any efforts to seriously investigate and prosecute the persons responsible,” the JET said in a statement.