Jagdeo Tells Guyanese Expatriates In Toronto Nagamootoo Is A “Megalomaniac”

Photo above is of Irfaan Ali, left, and Dr. Bharrat Jagdeo posing in front of the Guyana flag, after their media conference in Toronto, last Friday. Photo by Michael Van Cooten.

TORONTO, Ontario – Last Friday evening, Former Guyana President, Dr. Bharrat Jagdeo, told an audience of close to 500, that Opposition (APNU-AFC) Prime Ministerial candidate, Moses Nagamootoo, is a “megalomaniac”, has a lust for power and plays fast-and-loose with the truth.

This came about as Jagdeo, one of two visiting, high profile, Guyanese politicians, was comparing the character of the leading candidates of the ruling party, PPP-C, and the opposition coalition, APNU-AFC, at an election fundraising dinner and dance event, organised by the Association of Concerned Guyanese (ACG).

Irfaan Ali, the country’s Minister of Housing and Tourism was the other politician attending the event that was held at the Elite Banquet Hall in Toronto.

General elections will be held in Guyana — a small republic, with a population of approximately 800,000, on the north coast of South America — on Monday, May 11 of this year.

The former two-term president re-entered Guyana politics on Tuesday, April 7, after the PPP/C presented its list of candidates — on which his name was included — for the upcoming May 11 general and regional elections, to the Chief Elections Officer, Keith Lowenfeild.

Jagdeo — who had, on previous occasions, indicated a lack of interest in returning on the Party’s list after demitting office in 2011, stating that he was not interested in a constitutional post — has however, had a change of heart owing to, according to him, demands of Party supporters.

In his comparison of his party’s and the opposing candidates, Jagdeo said that the PPP-C’s Prime Ministerial candidate, Elizabeth Harper, “… comes from the Foreign Ministry. She was Director-General for several years…very competent. Donald Ramotar, our Presidential candidate, has had a history of fighting for people’s freedom, as General Secretary of the Party, for many, many years — a person fighting to enhance people’s freedoms.”

He then suggested that David Granger, the APNU-AFC Presidential candidate, was “delusional or dishonest”, for “saying that elections in Guyana were never rigged, in the face of his own supporters knowing different; in the face of all the Guyanese people, of all races, knowing this to be true — that elections were rigged; the Caribbean Council of Churches, the US Central Intelligence Agency (CIA), the British Secret Service, every government in the world … they talk about rigged elections.”

“Then, in 2015, Granger says there were no rigged elections; it’s cause for worry. Because if he can deny such an essential fact, what else will he deny in the future?” he asked.

“And,” he continued, “I think one of the reasons why he is denying this, is because of his own role in the army, in that period — helping to rig the election — would then be highlighted.”

Jagdeo said that some people say that the PPP-C should not criticise Granger but, he argues, he (Granger) has to account for his track record.

Then the former president, under whose tenure, major economic and social reforms were undertaken in Guyana, turned his laser focus on to Nagamootoo. 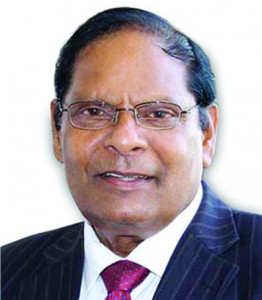 Jagdeo went on to portray Nagamootoo — the author of the novel, Hendree’s Cure (2001), which describes a world of Madrassi fishermen who inhabited the Corentyne village of Whim in the 1950s and 1960s — as a liar.

“And, he lied to the people in Whim. He said he never travelled in first class; Moses sat next to me in first class when we travelled abroad. He said he didn’t take salary increases until after the workers — the nurses, doctors and teachers — were paid. We checked the parliamentary record, and he was one of the first to pick up his cheque, in that period,” revealed Jagdeo, to uproarious laughter from the audience.

Nagamootoo is “hollow on policy,” said Jagdeo. “You’ll never hear Moses talk about the economy, or healthcare or education, or moving the country forward. He gives rah-rah speeches….but you don’t change a country by speeches — rah-rah speeches. You have to have clarity of thought; you have to be able to plan things. If he ever chairs the cabinet….this country would be in for disaster.”

Jagdeo then criticised the APNU-AFC proposed government leadership structure: “By the way, you see what they have promised? They have promised three Vice-presidents, a Prime Minister and a President. This is old vintage Burnhamism.

“If the United States is run with a President and Vice-president, why do we need three vice-presidents, the prime minister and a president. And they talk about cutting expenditure; we’ll have to carry all of these people.”

He then elaborated on the political challenge he posits the country is facing: “You have a government that wants to build a new airport; …reduce the cost of electricity by 40% per household; that would give subsidised healthcare through the construction of a speciality hospital; and all of this is blocked by a political opposition for narrow political gain. So the challenge is political.

“Here it is that the country has moved to a state where we now have the resources, we now have the revenue to transform, in a major way, the infrastructural landscape and service delivery landscape, and the only challenge that stands, as a block, is political.”

“Many of us here remember the commencement of the dictatorship from the coalition of the United Force (UF) and the Peoples National Congress (PNC),” he continued.

“You’ll recall what that coalition led to: 28 years of the dictatorship and destruction of our economy. Again today, we are revisited with that history; that history that can, once again, reverse the gains and can, once again, destroy our ability to take Guyana forward.”

The Housing and Tourism Minister then pointed out that the candidate for Finance Minister the APNU-AFC coalition is putting forward now, is Carl Greenidge, an economist and a former finance minister from the past (1983-1992), under whose tenure, according to him, the country’s economy was destroyed.

“We need to reflect on that past not only to remind ourselves of what we came through, but because that very past is part of the present today.

“The same player who destroyed the economy, the same player who managed the economy when almost 70% of our people were living in poverty; when inflation, as a percentage of GDP, went in excess of 600%; when our debt burden went in excess of $2 Billion; when commercial interest rates went to close to 40%; when the housing program was destroyed; and when investment in the social structure was remote; that same individual has returned as the opposition candidate for the Minister of Finance job — Carl Greenidge. So, it is now important for us to reflect on that, because he is now part of the present and…the past is relevant.”

Ali spent the rest of his presentation highlighting the “track record” of the current administration: reduced mortgage rates from 39% to 4.25%; improved access to primary education, from less than 50% of students, to 100%; increased access to secondary education from less than 45% to 93%, with a promise to take it to 100%; invested billions in education and built hundreds of schools; economy outperformed many CARICOM members in domestic credit to private sector, foreign direct investment, among other indicators; improved housing drastically, including reducing the average age of home ownership from about 60 years old to below 35 years old, and reducing squatter settlements from over 200 to less than 21; dramatic improvement in healthcare — increased life expectancy from 58 years old to close to 72; and progressively increased Old Age Pension and make it non-contributory, doing away with means testing.

“These are some of the transformations that have been taking place in our country. But this is a journey, there is still a lot more work to be done,” he said.

“What we are committing to you is that, we have shown you, through our track record, that we can get the job done and we have the plans and the programs that would ensure that the remaining job that is left to be done and creating that new transformed economy that will bring in the new wave of investment, we have the plan that will do justice for Guyana. And we are asking you to help us, to support us,” he added.

In concluding their remarks, Jagdeo and Ali encouraged members of the audience to get involved in the election campaign by financially supporting the PPP-C, and also implored them to contact their family, friends and acquaintances in Guyana and suggest, strongly, that they go out and vote.

After the fundraiser, Jagdeo and Ali — who earlier in the day attended a private breakfast meeting, where they attempted to sell business persons and professionals on investing in the PPP-C election campaign; and a little later, a media conference with local media outlets, at the Radisson Hotel in Toronto — left Canada for the United States, then returned to Guyana, last Sunday, to participate in a political rally in Linden.