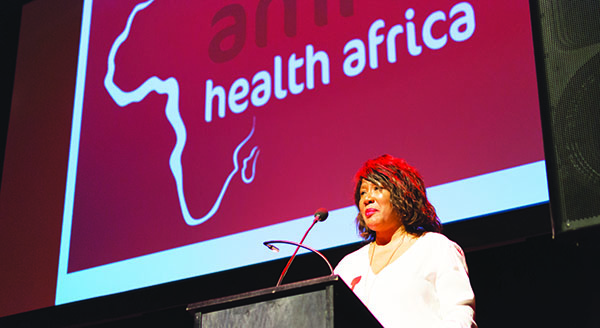 Photo above is of Dr. Mandela addressing the audience at the African marketplace gala. Photo: Amref.

TORONTO, Ontario — Dr. Makaziwe (Maki) Mandela, the eldest daughter of Nelson Mandela and his first wife, Evelyn Mase, has challenged Amref Health Africa and its supporters that a paradigm shift is needed in its work in Africa.

Amref Health Africa, the largest African-led international organization on the continent, provides training and health services to more than 30 countries in Africa.

With a focus on women and children, the organization manages a full range of medical and public health programs tacking the most critical health challenges facing the continent: maternal and childcare; HIV, TB and malaria; clean water and sanitation; and, surgical and clinical outreach.

“We need to do things differently, not the way that we have done them before, over and over again. And, it’s only in that way that we shift the thinking amongst our government, in society, which shifts how we do things on the ground,” she said.

Dr. Mandela was the keynote speaker at MAMATOTO, the African marketplace gala, a fundraiser for mother and child health in Africa organized by Amref Health Africa in Canada at Daniels Spectrum in Toronto on May 26.

She called on the organization to press Canada’s government to begin to put a lot of pressure on African governments to take responsibility and accountability for changing the lives of women and children in Africa.

She said it was good to hear about the initiatives from the Canadian government in Africa but wondered where are the African governments on this question.

“Without that, all of this initiative will be for naught. It is very, very important that we do that. And, I think we cannot just look at maternal and childcare in isolation of everything that’s happening in Africa because departments of health are only responsible for the health sector.”

She said even in places where healthcare professionals are trained, where there is instability, the women and the children are the first to be affected.

“And, those are issues in Africa that we cannot ignore that are plaguing us on a daily basis,” said Mandela, chairman of House of Mandela, a business that she started with her daughter, Tukwini Mandela, in 2010.

She noted that all the initiatives, such as the new sustainable development goals, that seek to help children and provide maternal care in Africa are very laudable and she is appreciative of them.

“However, when we look at what has been achieved so far, one has to ask the question, how long is Africa, we Africans, going to depend on help from outside? What will it take really to create, truly, a sustainable development in Africa so that the solutions for Africa’s problems are within Africa, and we just get support and a boost from outside?”

“Africa has never ever been poor. We are poor because of the leadership, because of lack of encouragement to do what is right by our people. So, if we’re going to succeed, our governments, our leaders have to dragged, kicking and screaming, to do what is right to the women. It is a shame that our leaders, mostly who are men, in my view, can still go about with a goal begging overseas for other men to support their own women in this day.”

She said the saying that “if you help women you help, not just the women themselves but the families, their neighbourhoods, their communities,” in actual fact, is contributing to what Africans call “ubuntu.”

Dr. Mandela said ubuntu exists in every culture in Africa, which means, “you are a person because of other people” and noted that the work of Amref Health Africa is a continuation, in a sense, of her father’s legacy.

In 1984, she received a Fulbright Foreign Scholarship and a Fulbright Distinguished Fellowship Award to study at the University of Massachusetts in the US for a Masters in Sociology and a Doctorate in Anthropology.

She implored Amref to think about partnering with governments, regional bodies such as SADC (Southern African Development Community), African Union, the development banks, and the private sector to drive initiatives about including women.

“Canadian mining sectors are very much involved in investing in Africa. They need to help us also by getting involved in these issues. It is not just enough for them to contribute to go into Africa and mine but we want to plead with you that wherever you have investments of mining to leave decent housing behind. That’s another issue that affects women and children because without a decent roof over their heads, we can talk about all the maternal care that we want, it will still not yield the positive results that we want.”

She said food companies, like Nestle, need to be involved in this cause and partner with Amref to provide nutritional food to mothers, to teach mothers how to grow better crops, and “to actually help us to go back to agriculture because most of Africa has moved away from actually subsistence farming.”

A consultant in training development and life skills at Self Empowerment International, she has presented numerous papers over the years, including the role of women in a changing South Africa.

She has been intricately involved in developing a substantial investment portfolio with Nozala, a women’s investment group, and using these funds in the economic upliftment and empowerment of women in South Africa.

Dr. Lennie Kyomuhangi-Igbodipe, Amref Health Africa interim global CEO, said a major achievement of the organization is the way that it has impacted “the poor of the poorest” – hard-to-reach vulnerable and marginalized groups in Africa, and especially women and children.

“We’ve been able to raise the issues that affect women, that affect children. We have touched, in the last year alone, we were able to reach 12 million people directly with our services, and indirectly, you multiply that maybe by about 4. But the most important thing, we impact communities.”

She said the organization empowers people to be able to make their own decisions regarding their health.

Lois Brown, parliamentary secretary to the Minister of International Development, said Canada’s top development priority is to improve the lives of mothers and children.

She said in 2010, Prime Minister Stephen Harper announced that Canada would take the leadership at the Muskoka Initiative on maternal, newborn and child health.

Canada committed to providing $1.1 billion in new funding between 2010 and 2015 to help women and children in the world’s poorest countries.

The government announced that it would maintain the ongoing spending of $1.75 billion in maternal, newborn and child health programming during the same period, resulting in a total commitment of $2.85 billion.