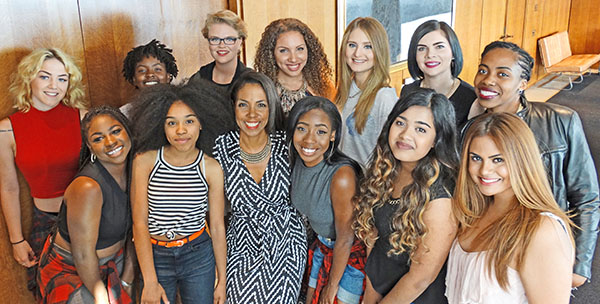 Photo above: Ebonnie Rowe (Front row, third from left, in black and white dress) and members of the Honey Jam crew.

TORONTO, Ontario – Honey Jam, a Canadian incubator program for young female artists, which was supposed to be a one-off event when it started, is celebrating its 20th anniversary.

It has produced legendary musicians like Nelly Furtado, Jully Black, Melanie Fiona and Michie Mee, and this year has selected17 artists to be a part of the Honey Jam program.

The artists will perform live at the Honey Jam Canada concert at The MOD Club in Toronto on August 13 and founder, Ebonnie Rowe, is buoyed by the growth of the initiative she started in 1995.

Recently, Honey Jam launched its 2015 program at the TD Tower in downtown Toronto with a special guest appearance by platinum selling artist, Victoria Duffield, who shared her journey as a female artist through the music industry.

“When we started it was by accident so it wasn’t a plan to start Honey Jam. It happened by accident after I was doing the Each One Teach One mentoring program hanging out with the teenagers. The female mentees were telling me that their little brothers were calling them ‘bitch’ and ‘hoe’ because they were hearing it on the college radio Hip Hop shows that were aired in the middle of the day.”

She was invited on one of the shows to talk about it and from that was subsequently asked to do the all-female issue of Mic Check magazine.

They had a wrap party to celebrate the issue, called it Honey Jam, and that was how it all started.

“It was only supposed to be that one-off party and then, in a sense, it was so popular, I decided, well, let me do it for a couple years and here we are 20 years later. So it came out of how women were portrayed specifically in Hip Hop and combatting negative stereotypes of women and providing a supportive safe space for them to express their art.”

Rowe said Honey Jam has grown leaps and bounds since then, especially after the success of Nelly Furtado, and then went from being 80% Hip Hop, 20% R&B to a complete wide variety of music genres a couple years after it began.

She said there is a change in the artists because of the technology and the accessibility to information.

It’s a DIY (do it yourself) type of industry where artists don’t have to rely on other people as much as they did in the past.

They can have their own website, use a digital camera to do their photos, and record beats in a home studio as long as they have a computer.

“You can put your stuff up on YouTube so the world can see you. So much has changed since ’95 and it’s difficult for people to understand that back in ’95 there was no YouTube, there was no Facebook, there was no Instagram; there was nothing. There was no Myspace, there was no Google, and so you were very much dependent on other people who were in those fields to share their knowledge with you, etc.”

The Honey Jam founder said women have risen, in terms of having more positions of power in the industry but it is still definitely male-dominated.

“We’ve made some strides, definitely not enough. You will still see women objectified in videos. You will still see sexism and you will still see a double standard in terms of a man expressing his sexuality or prowess in a song or video and how he would be bigged up and get a high five, whereas a woman doing the same thing would be, I guess the term now is called ‘slut-shaming’ – they are looked at in a derogatory type of way when they’re just trying to own their power in the same way.” She said a lot of the issues still exist but society has come a long way.

Initially, when Honey Jam started, Rowe felt very revolutionary with a goal to push and protest to make many things happen but now she is focused on providing a quality experience for the artists.

Her intent is to provide the best experience and as many opportunities as possible for them.

“The kind of focus of it has changed, from my perspective, in terms of our goal. Of course, we are always advocating for women and where we see discrimination pointing it out, etc. But we’ve moved into being a developmental program for young female artists, that’s more the focus of what we are now.”

When Honey Jam started, Rowe had a full time job as a legal assistant and because it happened by accident she did not have a business plan laid out.

It was something she did on the side and because it was a passion project for her and continues to be so, she initially funded it, but then it was much smaller.

Over the years, she would adjust the budget to suit the amount of funding they get each year.

“But it is very stressful to do that and not knowing every year are we going to be able to do it, how much money are we going to get, how is it going to work, and every non-profit struggles in this way. So, we make the best of what we have but we need to have a more financially sustainable model and try to find funders who will commit to a multi-year support model. I really don’t believe in crying victim and so while I do believe that we should get support from various areas, I also believe that we should work very hard to generate income ourselves so we’ve exploring different fundraising initiatives that can help to bring in money outside of our event season to help us to keep going.”

Honey Jam is an all female multicultural, multi-genre programme produced by PhemPhat Entertainment Group, a non-profit organization which provides educational, networking and mentoring opportunities for artists.

The artists range in age from 14 to 24 and are selected through auditions from across Canada.

They are mentored by producers, songwriters and musicians like Jarvis Church and James McCollum, formerly of Philosopher Kings; Vivian Barclay, general manager, Warner Chappell Music Canada; Ivan Evidente of Universal Music and others.

All of the artists chosen to perform this year will attend a free music industry workshop at Harris Institute, receive one-on-one vocal and performance coaching from celebrity coach, Elaine Overholt, of Big Voice Studios and have their original songs played on radio. They will also receive 1 hour A&R consultation time from Universal Music.

One lucky artist will receive the Honey Jam Hookup Prize Pak including $4,500 in equipment from Yamaha Canada, free entertainment lawyer consultation from Taylor, Klein Oballa, and a package from Think Fitness Studios, the opportunity to attend Canada’s Walk of Fame, and the opportunity to perform in Barbados.

Canada is a big market for Barbados so the Barbados Tourism Authority sponsors a prize for the winner.

For the fourth year, Honey Jam will take place in Barbados in November so the winner will get a chance to perform there.

Looking back over the twenty years, Rowe says she feels exhausted having burnt the candles at both ends over that time and even before that when she started the mentoring program.

“I’m very exhausted and burnt-out. At the same time, I’m very ecstatic that we got to this place. I’m very proud of all that we have done for the young women and the only two reasons that I’ve continued even though it’s been such struggle: one, it’s a passion project for me and I’m all about young people, mentoring providing opportunities, supporting them, helping them to grow…secondly, I would not do it if the artists did not write to me and tell me what it meant to them.”

She draws much inspiration to continue from Honey Jam artists like Victoria Sol who wrote: “Honey Jam is an amazing stepping stone in terms of the goals that I’ve set for myself as an artist. It has really built a reputation for itself so I’m very humbled and blessed to be a part of this experience, this family. The people here are very loving, very giving and supportive. I think for any female artist in Canada, Honey Jam is one of those things that, if you can get there, you know you’re moving forward. It opens a whole new network of opportunities.

“Honey Jam is where creativity and artistry meets advocacy and support for women. It has given me a lot of perspective in terms of what I need to do, and having those concrete goals really helps when you want to go somewhere. From finances to tax tips to media interviews, it’s all wonderful knowledge, and it’s all very valuable, because I’m just starting out and this is just the beginning of the journey for me. Also, knowing that we all have similar struggles like accepting yourself and building confidence. Knowing that other artists have similar obstacles as you is very helpful so I don’t feel alone, and it’s just amazing to have that kind of support.”

Rowe says Sol’s comment encapsulates everything that she has wanted Honey Jam to be and she reads it often to remind herself of that goal, mindful that she could not have done it without the Honey Jam volunteers — the team – and all the supporters.

“It takes a village,” she says, basking in the acknowledgement that Honey Jam is 20 years strong.