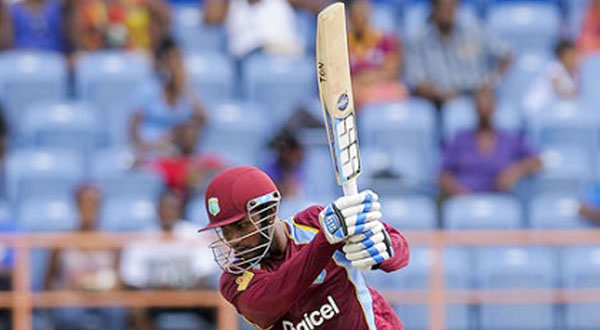 Photo above: Wicketkeeper/batsman, Denesh Ramdin, top-scored with 52 for the West Indies team.

The Caribbean side racked up 145 for five off their 20 overs at the Dubai International Cricket Stadium, with the right-handed Ramdin top-scoring with an unbeaten 52.

Jason Holder struck 23 not out, while captain, Darren Sammy, got 20.

In reply, all-rounder, Dwayne Bravo, picked up three for 26 as Warwickshire was limited to 132 for four, off their 20 overs.

Opener, Varun Chopra, top-scored with 41 while England-discard, Ian Bell, got 35, in an opening stand of 74. Chopra counted five fours while Bell gathered four fours and a six.

Once they were separated, however, Warwickshire lost four wickets for 38 runs to lose momentum, as West Indies closed out well.

Ramdin had earlier dragged West Indies out of a hole, where they lay languishing at 43 for four, inspiring two stands to get them up to their eventual total.

He stroked five fours and faced 36 deliveries, adding 34 for the fifth wicket with Sammy, and 68 in an unbroken sixth wicket stand with Holder.

West Indies will face Warwickshire again on Sunday in their final preparation game before they head to India to take on Australia and India in their two official warm-up for the Twenty20 World Cup.

They play India at Eden Gardens in Kolkata, next Thursday, before clashing with India three days later at the same venue.