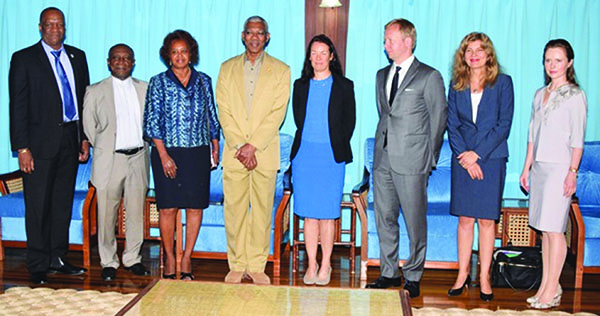 GEORGETOWN, Guyana, CMC – President David Granger Monday held talks with a delegation from the United Nations on a seeking a solution to the border dispute between his country and Venezuela.

“We are really here to inform ourselves of the views of the governments and their views on the next steps so that we can advise the Secretary General of the United Nations, who will then speak to the Presidents and craft a way forward,” said the chief, Americas Division in the Department of Political Affairs, Martha Doggett.

The UN is hoping to broker a meeting with President Granger and his Venezuelan counterpart Nicolas Maduro on the margins of the UN General Assembly to be held in September.
Venezuela has renewed its claim to the mineral and forest-rich Essequibo region and all of the Atlantic Sea off the Essequibo Region.

Maduro issued a Decree on May 26 that includes all the Atlantic waters off the Essequibo Coast.

The purported annexation of the waters off Essequibo now takes in the oil-rich Stabroek Block, where American oil giant Exxon Mobil in May found a “significant” reserve of high quality crude oil.

ExxonMobil said the discovery was made in one of the two wells it dug, in the Liza-1 drill site, which realised more than 295 feet of high-quality oil-bearing sandstone.

At the end of their annual summit in Barbados in July, Caribbean Community (CARICOM) countries reaffirmed the “longstanding, deep and wide-ranging friendship between CARICOM and the Bolivarian Republic of Venezuela”.

A government statement issued after the talks here said that it was also attended by Foreign Affairs Minister, Carl Greenidge and Minister of State, Joseph Harmon.

Doggett said that the UN has had a number of exchanges with both parties in New York at at the CARICOM summit in Barbados.

Granger at that meeting said that the Good Officer Process and the Geneva Convention which, have been adopted in the past, have been exhausted and a better solution is needed to end Venezuela’s aggression, with regard to Guyana’s sovereign territory.