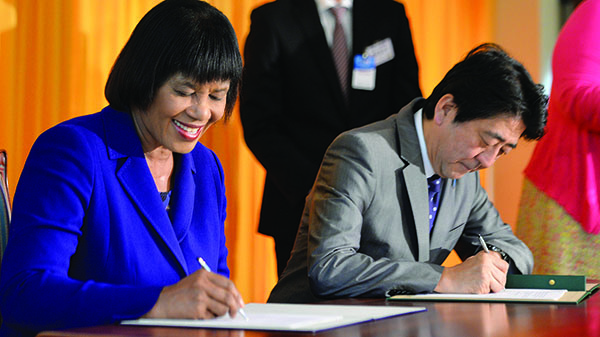 KINGSTON, Jamaica, CMC – Jamaica and Japan have agreed to expand trade between both countries.

Abe, who arrived here Wednesday for a one day visit, is scheduled to address a joint session of Parliament on Thursday.

While here, the Japanese Prime Minister is expected to use his visit to lobby Jamaica to influence member states in the Caribbean Community (CARICOM), in support of efforts to reform the UN Security Council.

Jamaica’s Ambassador to the UN Courtenay Rattray is the incumbent Chairman of the UN Intergovernmental Negotiations on Security Council reform.

Abe is visiting at the invitation of  Portia Simpson Miller, who visited the Asian country in November 2013. Simpson Miller renewed the invitation when the two leaders met again in July 2014 in Trinidad and Tobago at the first Japan-Caribbean Community (Caricom) summit.

Abe’s visit comes in the 51st year of bilateral relations between Kingston and Tokyo.