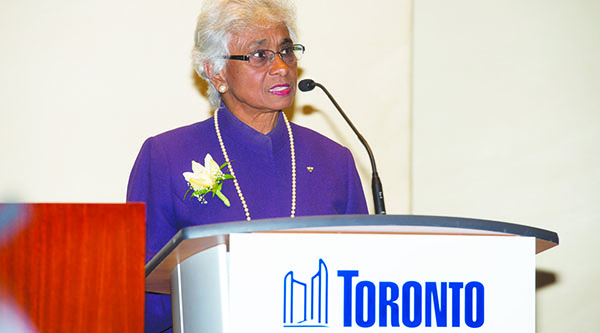 TORONTO, Ontario — Kamala-Jean Gopie, a longtime advocate for human rights and social justice, is the recipient of the City of Toronto’s William P. Hubbard Award for Race Relations.

The award, which was established in 1989, and named in honour of Toronto’s first African Canadian councilor, is presented to a person or persons whose outstanding achievement and commitment has fostered a positive race relations environment in Toronto.

It is also for someone who has encouraged others to become actively involved in the elimination of racism and prejudice.

The 2015 Access, Equity & Human Rights Awards, in celebration of Human Rights Day, was held in the Council Chamber, City Hall on December 2.

Sesum was unable to attend because she was in the hospital delivering her baby, so Councilor Janet Davis spoke on her behalf. Along with Davis, two other city councilors, Kristyn Wong-Tam and Gord Perks, presented the awards.

“Back in 1982, when I was a member of the City of Toronto’s first mayor’s race relations committee, I never imagined that 33 years later I would be selected to receive the William Hubbard Award for Race Relations,” said Gopie, who noted that at that time, apart from the award for women, none of the other awards were yet established.

“As the city, we had only just begun the journey towards recognizing  the need, as well as the benefits that access, equity and human rights would deliver to the residents of Toronto.”

Gopie has served as chair of the Urban Alliance on Race Relations and was a founding director of the Black Business and Professional Association in 1982.

She is best known for her community activism in Toronto, and has received many awards for her contributions, most notably the Order of Ontario in 1996.

“When I migrated to Canada in 1963 all by myself, I made a decision to contribute as best I knew how to my new and chosen home. Having spent my formative years at a Quaker boarding school and an Anglican girls school in Jamaica, I learnt that equity and justice were the paths to use to overcome discrimination and racism, ” said Gopie after receiving her award from Councilor Gord Perks.

She said it was not unusual for her to seek out and become involved with organizations and activities whose mission was to create a more equitable society.

Over the last 40 years, Gopie said she has endeavoured to give of her time, expertise and resources to help to make Toronto a better place for all its residents, especially those most vulnerable, ethnic and racial minorities and women.

“My actions have been influenced by two sayings which I will share with you. The first one is, “You make a living by what you earn; you make a life by what you give.” The second, I learned when I was about 9 years old and it has remained with me. “I shall not pass this way again therefore, any good thing that I could do, let me not neglect or defer, rather, let me do it now for I shall not pass this way again.” I often tell people that I’m more interested in the here and now than the hereafter.”

Gopie was a member of the Task Force on Policing and Race Relations in 1988-89.

Its recommendations helped to change policies and practices in policing in Ontario. Over the years, she has lobbied institutions to change their practices and become more inclusive.

“Working for equity and justice is a lifelong commitment, and this award is a public acknowledgment that efforts to build a society free from discrimination and racism, are worthy of recognition,” she said.

She served as a governor of the University of Toronto in the 1990s;  was an education officer in the race and ethnic relations branch of the Ministry of Education, 1994-1998;  was appointed to the federal Immigration and Refugee Board in 1998 and the Ontario Human Rights Commission in 2006.

Councilor Kristyn Wong-Tam said the awards are a testament to the residents of Toronto, who continue to work hard day in and day out to build a stronger and fair city.

A longtime advocate for equity and chair of the disability, access and inclusion advisory committee, Wong-Tam said she has seen, first hand, the importance of letting people use their voice.

“Whether its removing physical and attitudinal barriers where people live, work, invest and play; adopting a gender lens to the city’s policies and services, so that our transit system works better for everyone, including women and girls; or whether its ensuring that people from all walks of life, whether it’s our youth or our seniors feel welcome and a sense of belonging; we are truly stronger when we work together, when we bring every single person to that table,” she said.

In April 2003, Toronto City Council adopted a vision statement on access, equity and diversity which states, in part, that, “the City recognizes the barriers of discrimination and disadvantage faced by human rights protected groups.”

“They are shared commitments, we agree with them as staff, we agree with them as members of our community, our society, we certainly agree with them politically. These are shared concepts, these are concepts with which we are almost universally comfortable and can make an almost universally easy commitment.  But that’s not what actually happens. The reality is these are very, very challenging things,” he said, noting that these are things for which leaders and communities must be held accountable, for (IT IS) not what they say but what they do.

Uzma Shakir, director of equity, diversity and human rights of the City of Toronto, gave the vote of thanks. The emcee was Patricia Jaggernauth of CP24 and Lishai Peel, a spoken word artist, performed at the event.

The deadline for nominations for the 2016 Access, Equity and Human Rights Awards is Monday, May 2, 2016.

All nominations must be for a resident of Toronto, a service provided for city residents, or a building located in the city serving Torontonians.