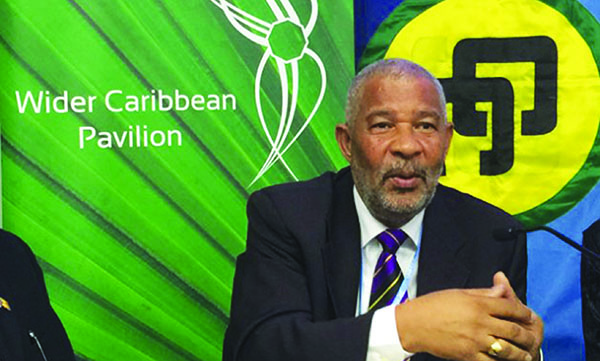 Making The Case For Caribbean Fishers At Paris Climate Conference

Photo above: Horace Walters, who has been involved in fishing for more than 40 years, said coastal communities, fishers, and fish farmers are already profoundly affected by climate change. He pointed to rising sea levels and acid oceans among the impacts of climate change. Photo credit: Desmond Brown/IPS.

PARIS, France (IPS) — Horace Walters has made the 6,903km journey from his native St. Lucia to Paris to deliver a simple, yet urgent message to the international community.

Walters, who has been involved in fishing for more than 40 years, said coastal communities, fishers, and fish farmers are already profoundly affected by climate change. He pointed to rising sea levels and acid oceans among the impacts of climate change.

“We need the international organisations and the (rich) countries to put their money where they have done a lot of damage. The damage is not done by us. We have not been able to have that kind of impact on the environment like the developed world has had so we want them to be mindful and we want them to understand that we need support,” Walters told IPS.

In the CARICOM region, the local population is highly dependent on fish for economic and social development. This resource also contributes significantly to food security, poverty alleviation, employment, foreign exchange earnings, development and stability of rural and coastal communities, culture, recreation and tourism.

“We want to ensure that there is recognition of the negative impacts of climate change on our fishing industry; that our people need to continue to sustainably use the resources and based on the science we have not been overexploiting out resources,” Walters, who is the President St. Lucia Fisher Folk Cooperative Society, said.

“We have to be mindful that our people want to eat good protein and fish is a source of the best protein.”

Dr. Asha Singh, who heads the Ocean Governance Unit in the Organisation of Eastern Caribbean States (OECS) told IPS: “We derive about 55 per cent of our protein needs from the marine environment. Fisheries is an important sector for us. However we have not had success in promoting that into viable economic activity. It’s still a very small percentage on our GDP (Gross Domestic Product) chart.”

“The haul-up areas are going to have to be re-established, redeveloped and some of our people are beginning to understand what it will cost because there is a cost when you lose all of your facilities. A lot of facilities have been built, landing ramps, fishing boat enclosures and with the sea level rise we anticipate that we might not be able to use them anymore,” he said.

“A lot of fishermen live in the coastal areas and if these are inundated with water we have to have a new land policy to relocate those people. It’s going to be a really difficult preposition for our people because in the Caribbean we are fish eaters.”

Experts have warned that the acidity of the world’s oceans may increase by 170 per cent by the end of the century, bringing significant economic losses. The scientists say that marine ecosystems and biodiversity are likely to change as a result of ocean acidification, with far-reaching consequences for humans.

They also warned that economic losses from declines in shellfish aquaculture and the degradation of tropical coral reefs may be substantial owing to the sensitivity of mollusks and corals to ocean acidification.

“In our islands we use fish pots and traps and we understand that with sea level rise the coral are going to end up in deep water. So we will have no fish on the coral reefs. So the pot and trap fishermen will have serious problems,” Walters said.

“If you understand what fishing is all about in the Caribbean, we have fishermen who fish in the near shore areas and we have those who go to do deep sea fishing. We have fishermen who set nets on the beach and we are going to have all kinds of problems if our coral reefs are too deep, if we cannot catch lobster, high-priced species and conch because of the ocean acidification and we will have to find new areas to fish.

“So climate change is going to create problems for the fishing community and we want to tell the developed world that not only must they be mindful of the impact of their development, we want them to understand that we in the Caribbean we need to get support,” Walters added

Dr. Owen Day, the Director of C-FISH, said coastal communities that are reliant solely on fishing need to be given greater opportunities.

“Coral reefs are essential for the Caribbean and we are losing them. This is a priority,” he said at a side event at the UN Climate Conference (COP21).

“Climate change is an enormous threat but we shouldn’t give up. Obviously reducing emissions has to be an urgent action that we press and 1.5 degrees is a maximum that we have to be fighting for but we also need local action on the ground to increase the resilience of these eco systems.

“It can make a huge difference and we have models of success to prove it. Reducing fishing pressure on coral reefs is sometimes not very politically. Fishing is something is that is politically challenging at times but it is a priority. Fisheries management needs to be given more resources. It’s an adaptation priority,” he said.