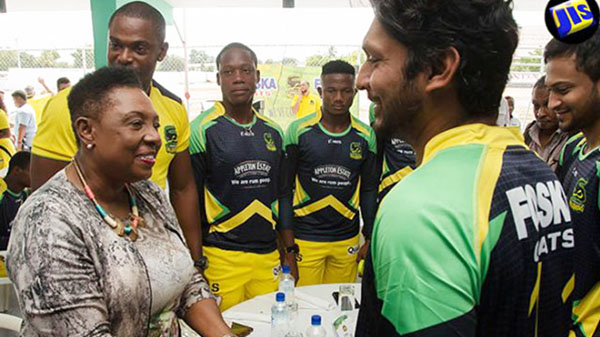 KINGSTON, Jamaica, July 4, (JIS) — Minister of Culture, Gender, Entertainment and Sport, Olivia Grange, has hailed the Caribbean Premier League (CPL) as an important product that has the potential to lift the regional game.

“We are very pleased that cricket is, once again, on the rise in the Caribbean and that the CPL provides a great opportunity for Caribbean people to rally in support of the region’s (team),” she said.

The Minister was speaking at the launch of the Jamaica Tallawahs Caribbean Premier League campaign on June 28 on the grounds of the Melbourne Cricket Club in Kingston.

The tournament, which will be held from June 29 to August 7, will be televised across the world to more than 200 million households.

She noted that the participation of the Jamaica franchise in the tournament will attract additional visitors to the island and leverage Brand Jamaica.

“We commend the Tallawahs brand and, of course, our world-class players for shining the spotlight on the region and on Jamaica, and we look forward to working with you in doing our part in growing this franchise, which we know has tremendous potential to benefit Jamaica,” she said.

Grange lauded Foska Oats, the founding sponsor of the Jamaica Tallawahs, for supporting the team for the fourth consecutive year.

“Foska Oats has demonstrated in its sponsorship that they know how to stay the course. This we can observe in their business practices as well as in their products,” she said.

She urged the players to give of their best during the tournament.

In his remarks, Director of Caribbean Foods Limited, Christopher Ramson, said that Foska Oats, through its sponsorship of the Jamaica Tallawahs, is supporting cricket in the country and assisting in the development of Jamaica youth through sports.

“That is why we also extended our support from last year to the Melbourne Cricket Camp Program to ensure that the talents of young Jamaican cricketers are given the right platform to be honed and developed,” he said.

Team Coach, Paul Nixon, for his part, informed that preparations are going “very well, adding that the team consists of “great players”. The Caribbean Premier League is one of the top Twenty20 cricket leagues around the globe with the first edition of championship taking place in 2013.

The league features six clubs from Jamaica, Barbados, Guyana, Trinidad and Tobago, St. Lucia, and St. Kitts and Nevis, which will play off in 34 matches, culminating in the final on August 7.