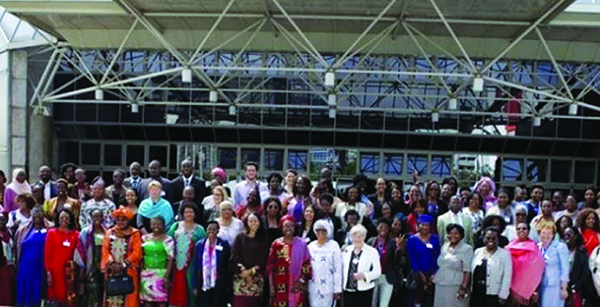 Photo above: Participants in the African Union Gender Pre-Summit on 2016 African Year of Human Rights, with Particular Focus on the Rights of Women in Addis Ababa. Photo courtesy of the African Union Commission.

CAIRO, Egypt (IPS) — Economic exclusion; financial systems that perpetuate their discrimination; limited participation in political and public life; lack of access to education and poor retention of girls in schools; gender-based violence; harmful cultural practices, and exclusion of women from peace tables, are the major standing barriers to achieving gender equality in Africa.

These challenges are now top on the agenda of the “8th African Union Gender Pre-Summit on 2016 African Year of Human Rights, with Particular Focus on the Rights of Women” taking place in Addis Ababa on 17 – 21 January.

The event is preparatory to the 26th African Union Summit which will bring together the heads of states and governments of the 54 African countries in Addis Ababa on 21-31 January. Significantly the Summit‘s theme is Human Rights With a Particular Focus on the Rights of Women.

More than 600 Million Women in Africa

Women represent more than half of the 1,2 billion African population living on a total of 30.2 million km2 and speaking up to 2,000 different native languages. More than 50 percent of Africa’s population is under 25 years of age.

Due to the numerous armed conflicts in the continent-which is home to nearly half of the 42 ongoing conflicts – African women are in charge of the majority of households and are key food producers, and they represent more than 43 percent of the agricultural labour force, in addition to playing a major role in managing poultry, dairy animals, fisheries, aquaculture, and the marketing of handcrafts and food products.

The pre-summit event relies on a strong participation of civil society organisations, and includes an experts meeting of the Specialised Technical Committee on Gender and Women Empowerment, and a closed session of African ministers, among others, and will culminate with a joint meeting of all parties and stakeholders.

Both the pre-summit and the summit coincide with “2016, the African Year of Human Rights, with Particular Focus on the Rights of Women”.

According to the African Union Commission (AUC), the continent continues to face enormous challenges with regards to the respect, promotion, protection and fulfillment of human rights, which if not urgently and adequately addressed, may erase the human rights gains recorded over the preceding decades.

These challenges also include “persistent violence across the continent which result in destruction of life, property and reverse human rights gains, widespread poverty, ignorance and lack of awareness, the effects of colonialism characterized by human rights unfriendly laws, bad governance, corruption and disregard for the rule of law.”

According to the AUC, “the year 2016 marks important milestones in the continental and global women’s agenda for gender equality and women empowerment.”

Among others, continentally, it is the 30th anniversary of the coming into force of the African Charter on Human and People’s Rights in 1986 and the beginning of the second phase of the African Women’s Decade 2010-2020, it adds.

Globally, 2016 commemorates 36 years since the adoption of The Convention on the Elimination of all Forms of Discrimination Against Women (CEDAW), an international treaty adopted in 1979 by the UN General Assembly, which is described as the international bill of rights for women, and the 21st anniversary of the 1995 Beijing Declaration and Platform for Action, which is the key global policy on gender equality.

To commemorate “these important milestones,” the AUC reports, the African Union Heads of State and Government at their 25th Ordinary Summit in June 2015 in Sandton, South Africa, declared 2016 as “the Africa Year of Human Rights, in particular, with focus on the Rights of Women”.

“Considering that 2015 was declared the “Year of Women’s Empowerment and Development Towards Africa’s Agenda 2063”, the 2016 theme marks the second consecutive year that gender equality and women’s empowerment are adopted as the highest priority on the continental agenda, “ AUC underlines.

The overall objective of the Gender Pre-Summit is to bring together voices of key actors in the gender equality and women’s empowerment arena, to update and discuss critical developments in the field, assess the extent of implementation of commitments, especially the Declaration on 2015 Year of Women’s Empowerment and Development Towards Africa’s Agenda 2063 as well as the Mid-Term Review of the African Women’s Decade, the AUC reports.

It also aims at identifying future priority areas of action including the implementation of the 2016 year of Human Rights with a focus on the Rights of Women, and call for greater acceleration in the effective implementation of commitments on gender equality and women’s empowerment.

The pre-summit event is expected to culminate with a document/communiqué including concrete decisions to be presented to the AU Summit of Heads of State and Government, for consideration and adoption.