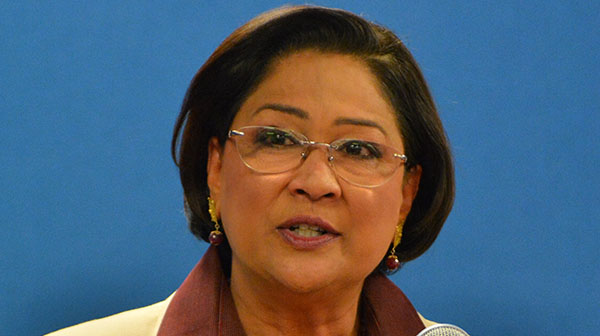 PORT OF SPAIN, Trinidad, Mar. 21, (CMC) – Pressure is mounting on Trinidad and Tobago legislators to say whether or not they have hired relatives at their constituency offices, following the recent dismissal of Housing and Urban Development Minister, Marlene Mc Donald, for allegedly breaching the Parliament’s guidelines on the matter.

The non-governmental organisation (NGO) group, Fixin T&T, says, it intends to get the Integrity Commission and the Director of Public Prosecutions (DPP) to probe several opposition legislators, including former Prime Minister, Kamla Persad Bissessar, who have admitted hiring “relatives” at their constituency offices in the past.

Fixin’ T&T, which played a major role in the campaign against McDonald, said, it is “deeply troubled” and “utterly confused” by Persad Bissessar’s response, to the fact that she has two relatives employed at her Siparia constituency office.

Former government Minister, Suruj Rambachan, is calling on the Clerk of the House to clarify the new rules, after Persad Bissessar and colleagues, Barry Padarath, Dr Bhoe Tewarie and Rushton Paray, all said they had relatives working, or had worked, at their constituency offices.

McDonald was fired from the six-month old administration after Prime Minister Dr. Keith Rowley said, he would act on the latest media reports that indicated she had her common-law husband and his brother working at her Port-of-Spain constituency office, from 2010.

Over the weekend, Persad Bissessar told a congress of her United National Congress (UNC) that two “relatives” had been employed at her constituency office for several years, and she was now seeking advice from the Parliament on the situation.

In calling on the Clerk to clarify the situation, Rambachan said, “the question arises—who changed the guidelines. Were the guidelines formally communicated to MPs or was the manual simply distributed to Parliamentarians without specific communications on the changes?

“What powers does the Clerk of the House have with respect to the regulation of Constituency Offices and should the Clerk’s powers not be circumscribed by what the House Committee and/or the Parliament agree upon. I wish to call upon the Clerk of the House to provide clarity to the issue, by responding, as early as practicable, to the advice sought by (Persad-Bissessar) and to publish the names of all persons employed at Constituency Offices since the inception of such offices, he said.

But both the ruling People’s National Movement (PNM) and the small opposition, Independent Liberal Party (ILP), have questioned the sincerity of the statements made by the opposition legislators, saying that they were well aware of the new guidelines.

PNM’s Public Relations Officer, Ronald Huggins, is quoted by an online publication as saying, that the guidelines that govern the staffing of offices for Members of Parliament apply to everyone and, therefore, it is wild and hypocritical for Persad Bissessar to have campaigned for the removal of Mc Donald, based on evidence in the public domain, and then try to defend herself for breaching the very same code.

“As an attorney SC (Senior Counsel) and Parliamentary Legislator, Mrs Persad Bissessar has a responsibility to uphold and practice the law,” he said, adding, “it is therefore clear that Mrs Persad Bissessar has consciously neglected the Parliamentary code and the Integrity in Public Life Act by continuing to employ a close relative, to date, at her office and it is against this background she must resign.”

ILP leader, Rekha Ramjit, said, the explanations given by Persad Bissessar and the other opposition legislators “are extremely weak at best, although they do assist in clarifying the fact that the respective MPs have, through the authority they possess by virtue of their offices, knowingly hired their relatives.

“Their conduct amount to knowing abuse of authority, conflict of interest, breach of Parliament policy, breach of convention, violation of the Code of Conduct of the Integrity in Public Life Act and bringing their respective offices into disrepute.”

“In legal terms, this is a matter of strict liability. The Integrity in Public Life Act – Part IV prohibits the use of office by a Person in Public Life for the improper advancement of their own personal gain, that of their family or the financial interest of such persons,” she said, in a statement, adding: the Act also empowers the Integrity Commission to consider and enquire into any alleged breaches of the Act or any allegations of corrupt or dishonest conduct on the Commission’s own initiative or upon the complaint of any member of the public.”

“The 2007 policy states that parents, children and spouses are not allowed,” she said, adding, “they (opposition) cannot say they were unaware of the consequences of hiring their relatives”.