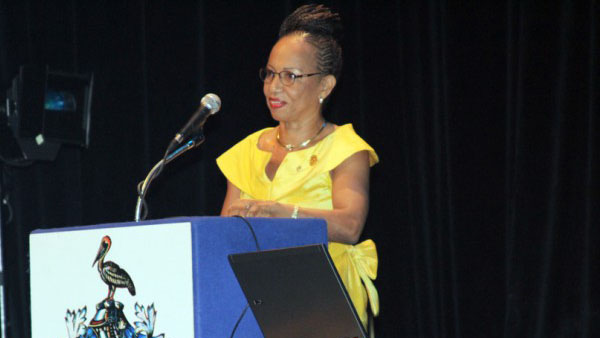 Professor Eudine Barriteau, Principal of the Cave Hill campus of the University of the West Indies (UWI).

BRIDGETOWN, Barbados, July 13, (CMC) – The Principal of the Cave Hill campus of the University of the West Indies (UWI), Professor Eudine Barriteau, has made an impassioned plea for the Barbados government to meet its multi-million dollar debt to the regional tertiary institution.

“On assuming office last year, I recognized I inherited a beautiful campus, significant infrastructural and programmatic platform, a committed staff and a growing governmental debt.

“This debt is affecting the campus’ ability to meet basic operational requirements, such as refurbishment of classrooms, laboratories and dormitories. It is also constraining the campus’ capacity to expand in ways that benefit the campus and country,” Barriteau told the launch of a Caribbean Sports Conference here, yesterday.

Barriteau said the government’s debt, estimated at BDS$200 million (One Barbados dollar =US$0.50 cents), was seriously hindering her administration’s ability to perform operational and expansion programs.

She listed a number of projects undertaken by the campus and lamented the fact that much more could have been achieved if the university had been able to collect even a fraction of the outstanding debt.

“Our ability to expand and meet growing demand is hampered by the serious debt owed to the campus by the government. We urge the government to assist the campus by meeting at least some portion of the considerable arrears that are outstanding. We cannot afford to ignore this obligation as if it will disappear,” she said.

Barriteau said that the programs to be undertaken were not provincial in their design and would symbiotically benefit the country, as the Cave Hill campus continued to be a vital contributor to the Barbados economy.

She told the delegates that academic and sports tourism continued to be facets of the island’s tourism product and were bolstered significantly by the university.

“That is why we look forward, with anticipation, to the Barbados government honouring its promise of paying the more than $190 million owed to the University of West Indies, to enable us to proceed with programs and plans that would help us to overcome our present difficulties and pave the way for a more lucrative, sustainable future,” she said.

The Barbados government’s debt to the Cave Hill Campus has increased exponentially since 2011. Former principal, Professor Sir Hilary Beckles, said five years ago, that UWI was owed $90 million by government, which was the most indebted of the 17 participating countries in the Cave Hill Campus.