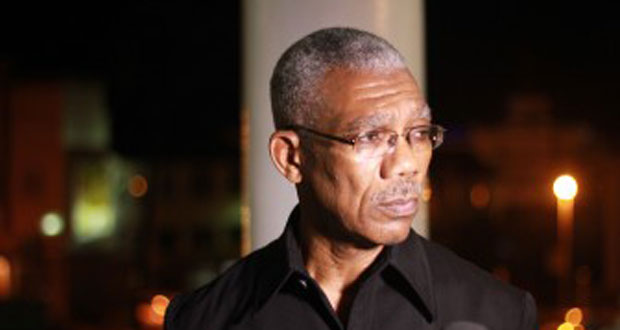 GEORGETOWN, Guyana, March 28, 2018 (CMC) – President David Granger said, today, the police have been given instructions to conduct a probe into the circumstances, under which three men were shot and killed by law enforcement authorities at the Georgetown Seawall Road, on March 15

“We have ordered an investigation into the circumstances, under which the men came to be killed, and I believe some action will be taken, to have the file sent to the DPP (Director of Public Prosecutions) to determine whether there is any blameworthiness in the death of the persons,” Granger told reporters.

In an official statement, just after the shooting, the police said the men were killed during an exchange of gunfire, after they had trailed a customer, who had just exited a city bank with a large sum of money.

But since then, one person, who claimed he witnessed the shootings, has disputed the police account.

The police said that a gun had been retrieved from the scene and the autopsies indicated that the men — 46-year-old Dextroy “Dutty” Cordis, 57-year-old Errol “Dynamite” Adams and Kwame Assanah — had been shot several times.

President Granger told reporters that a report on the incident had been submitted to the Minister of Public Security, Khemraj Ramjattan, but it has not reached his desk.

Granger defended his government’s perceived silence on the killings, telling reporters “….we are not silent. The response that we have made is decisive and effective. The Commissioner of Police has received clear instructions about the investigation. Even if such instructions were not necessary, he should be proceeding with those”.

Granger said he also expects that, in keeping with the laws of the country, a Coroner’s Inquest would be held.

“I don’t have to order an inquest…I expect an inquest. It’s under the law. The law is there so, as far I am concerned, there should be no controversy. The death of any citizen in abnormal or irregular circumstances should be investigated,” he said, adding “It is my opinion that on any occasion where there is the death of person, by unnatural means, that it should be investigated, particularly in the Defence and Police Forces.”